This Halloween, Scare Up Some Fun at “The Village on Front” in Downtown Arlington

Something creepy is definitely going on at Knapp Heritage Park.

Ordinarily, Knapp Heritage Park in Downtown Arlington is a quiet little place with a big history. With its collection of buildings dating back to Arlington’s earliest days, the Park provides a life-sized look at the past.

An extension of the Fielder House Museum and the Arlington Historical Society’s programming, Knapp boasts an authentic one room schoolhouse, one room cabin, dog trot cabin, the Bardin blacksmith barn, and a general store inside James Knapp's old law office. School children and history buffs of all ages visit Knapp year-round for special events like the Front Street Festival and blacksmith presentations.

This October, however, Knapp Heritage Park is going from tranquil to terrifying.

Beware of things that go bump in the night 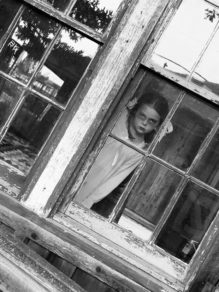 Like any great ghost story, The Village on Front has a backstory that fits perfectly with its 1800s setting. Paul Fulks, President of 3Di and famed Halloween enthusiast, won’t tell us much except that the character of “Little Mary” plays a pivotal role.

“We’ve been having a blast working with incredible special effects experts from both Los Angeles and New York,” said Paul. “These are folks who have created characters and props for Hollywood productions, and they pulled out all the stops for Arlington.”

The Village will include a haunted maze that winds you through each spooky, startling scene. The incredible light and sound effects are sure to enhance the heart-pounding surprises lurking around every corner.

“It’s been about twenty years since Arlington had a haunted house,” Paul continued. “Now we have a haunted village. Working with the Arlington Historical Society to make this happen is a dream come true. Or should I say nightmare?”

The gate to The Village on Front will creak open on October 10 and slam shut for the season on November 3. Hours are: 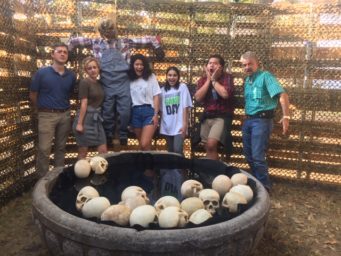 Paul Fulks and the Downtown Arlington MOD Squad check in to The Village on Front... but do they check out?[/caption]

Tickets are $24.99 each or $199.99 for groups of ten when purchased in advance. Tickets are available now on the Eventbrite page.

Are you brave enough to take a peek inside The Village on Front? Follow The Village on its Facebook page to see some of the creepy characters in the daylight… so you know what to look out for after dark.

Don’t let construction on Abram St. get you down. Download Waze for free and see real-time traffic, find optimal routes, and avoid road closures. Or skip parking altogether and hail Via Arlington ride share for only $3, Uber, or Lyft.

Designated by the State of Texas as the Arlington Cultural District, Downtown Arlington is where creativity, authenticity, and hometown pride thrive and drive what's next. Within its less than a two-mile radius, Downtown is home to a top tier public research university, prolific visual and performing artists and arts institutions, live entertainment, exciting NCAA and professional athletics, one-of-a-kind dining and retail, and a supportive business climate.