Investors and developers have been discovering Downtown Arlington. With significant new investments already completed or underway in housing, mixed-use projects, new commercial buildings, and a robust number of adaptive re-use projects, spaces are being re-imagining for new and exciting uses for entertainment, retail, business and housing. Projects that have already been permitted and/or are in the pipeline are part of our Emerging Projects, to provide a glimpse of what is to come.

Set to open in 2023, construction is underway on a more modern, more efficient Fire Station No. 1 in Downtown Arlington. The two-story, 17,667-square-foot station replaces the old Fire Station No. 1, which originally opened in 1954. The new facility is designed to provide a better work and living space for Arlington’s firefighters. Features will include five larger, drive-thru apparatus bays that can hold more equipment, training areas and indoor and outdoor kennels for the Fire Department’s K9 Unit, a full kitchen and a dining room, and various offices. The station will also include a public space for community events and meetings as well as a museum area about the Arlington Fire Department’s history and accomplishments, and for visitors to see historical items up close, such as an antique fire engine.

The Center for Entrepreneurship and Economic Innovoation (CEEI)

With support from the State of Texas, UTA has established the Center for Entrepreneurship and Economic Innovation (CEEI) to foster a vibrant and collaborative atmosphere for students, faculty, entrepreneurs, and community members to create new opportunities, commercialize new technologies, and pioneer new companies. Once it officially opens in early 2022, the 4,000 square foot center will be used for classes, events, collaborative work, and one-on-one meetings with mentors and service providers. Located at the highly visible intersection of Center Street and UTA Boulevard, the CEEI will be the venue of choice for several flagship programs at UTA, including the EpICMavs discussion series, Blackstone LaunchPad, and the MavPitch business plan competition.

Downtown Arlington’s first luxury townhome villa development is now entering phase 2, adding 16 villas to the project by Summer 2022. Modeled after the Dallas Highland Park luxury urban villas, the Main 7 development provides for 2/3 bedroom and 2 car garage housing opportunity starting at $415,000 for those dreaming of downtown residency. The white finishes and painted brick provide a beautiful end cap to Downtown’s Abram and Cooper intersection, with public art and a central sculpture garden for residents.

Established in the 1890s, the mineral well was a major landmark in the center of Arlington. Mineral water flowed through lions’ head sculptures mounted on four-sides of the fountain, serving as a focal point until the early 1950s when the well was torn down due to the City’s growth. In 2022, the creation of a new cultural landmark has begun in commemoration of this time in Arlington’s early history -- a Mineral Well Fountain Clock Tower. Designed by Jim Richards, a national award-winning landscape architect and designer, the art installation will also include outdoor seating and a 40-foot-tall clock tower featuring four lion sculptures by local artist Janice Hart Melito. Funded by a $1,000,000 grant from the Arlington Tomorrow Foundation, the tower will be located in the plaza between the George W. Hawkes Downtown Library and City Hall. 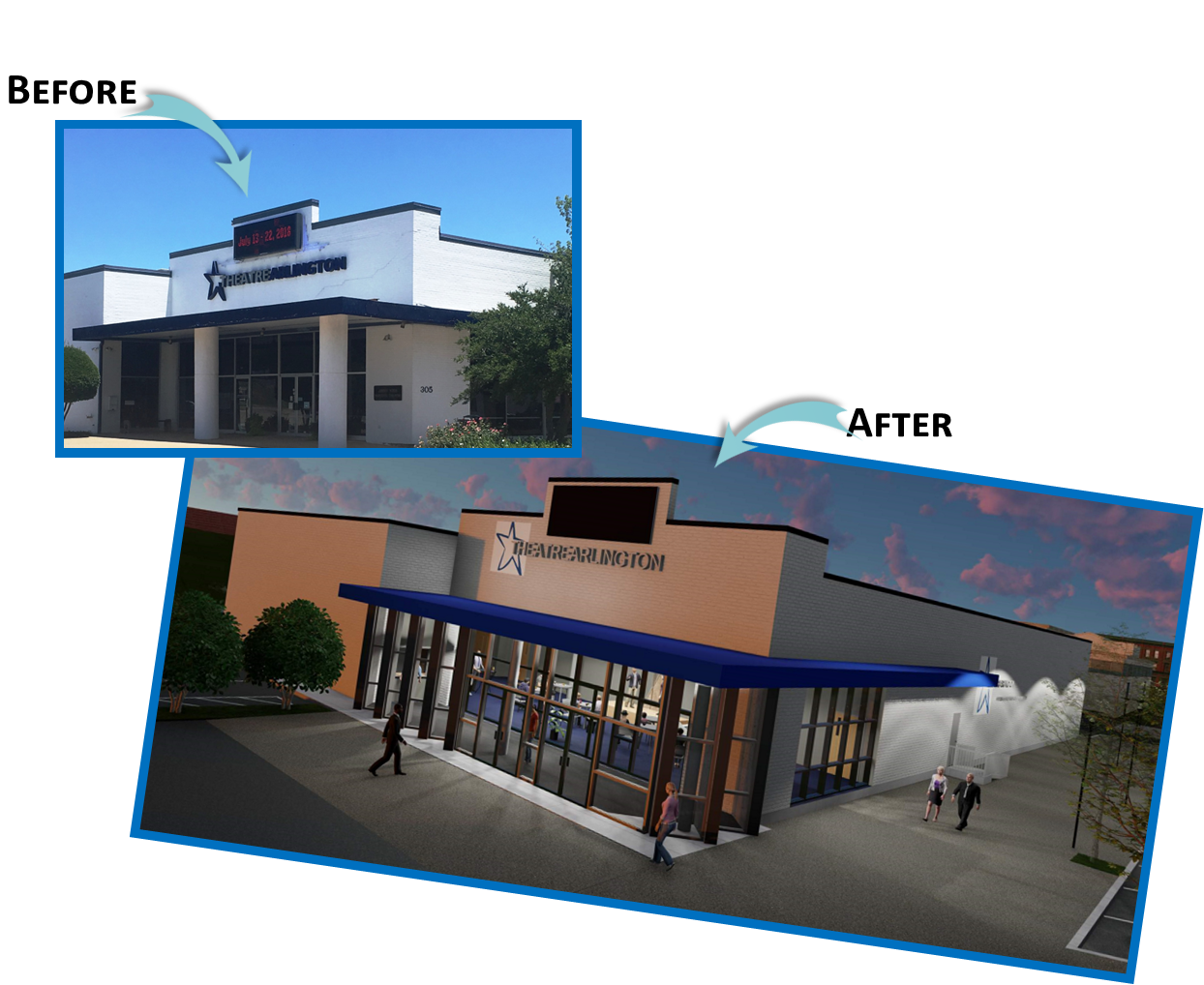 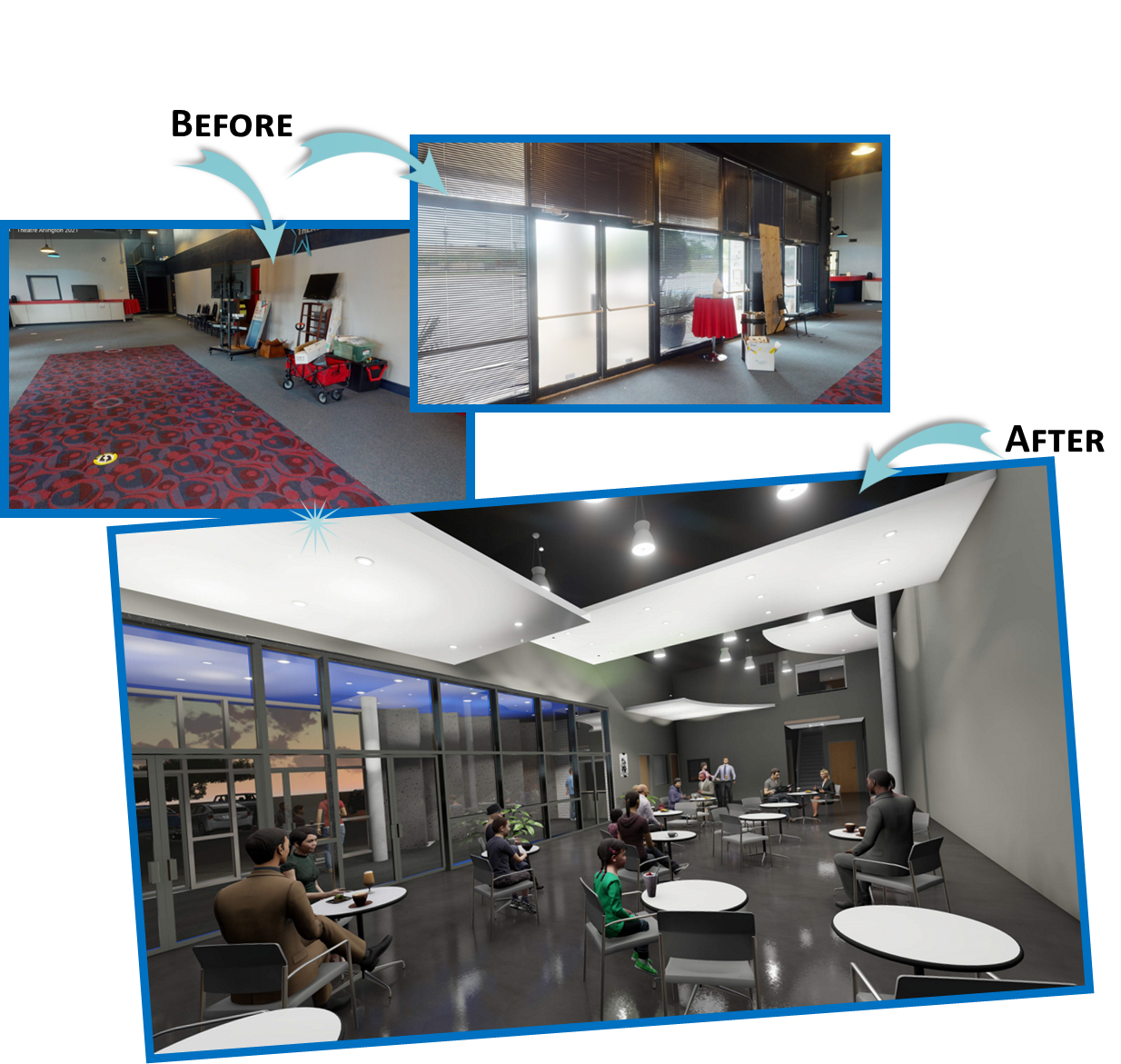 In early 2022, the curtains of Theatre Arlington will go up again as its $3 million renovation is completed in time to kick-off its 49th season. In partnership with LBL Architects and RJM Contractors, the theatre’s transformation includes a new exterior, an expanded lobby and other interior improvements including new dressing rooms, the addition of two new classrooms and a new stage. These much-needed improvements provide enhanced production quality and patron experience and support the company’s efforts to expand its outreach and educational programming.

This ambitious expansion of Downtown Arlington's popular mixed-use development will extend the Urban Union footprint west along Front Street and includes five new mixed-use buildings. In addition to restaurants, retails and loft apartments, a new office building will be a key feature of this phase of Urban Union’s development. It will be the first professional office building of its scale to be built in Downtown in decades. Tenants including Sutton Frost Cary LLP, Spiral Diner, Doughboy Donuts, Cow Tipping Creamery, and Coop’s Fowl Ball (a new sports bar concept featuring a family-friendly menu) have already announced they will be part of Urban Union Phase 2.

This new community will consist of 65 two and three-bedroom homes with rear entry attached two-car garages. The “for-lease” residences will be situated on open common space to promote a sense of community, while also enjoying an individually fenced front yard. Residents will enjoy a beautiful public park and walkable proximity to the restaurants and entertainment offered in the downtown area.