Here are the anticipated traffic impacts for the coming weeks on and along Abram Street in Downtown Arlington. Closures and detours are subject to changes due to weather and schedule. In future updates, new information will be indicated in bold.

Abram Street between Pecan and Center

The outside lanes of eastbound and westbound Abram Street between Pecan and Center streets, which is the area between City Hall and the Levitt Pavilion, will be closed to traffic through August 2018. 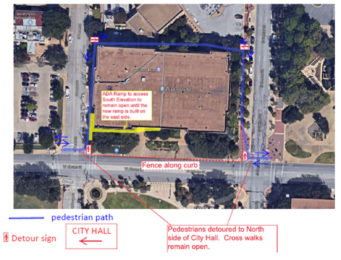 Free parking is available throughout Downtown, including in the public lot west of City Hall, in the 101 Center Parking garage, along Front Street, and in the new reverse-angle parking spaces along Abram, Center and Mesquite streets.

Abram Street will be open to two-way traffic throughout its two-year redevelopment. Track #myAbram and visit myAbram.com for the latest information about traffic routing and construction milestones. Download Waze for free and see real-time traffic, find optimal routes and avoid road closures, or for only $3 take Via Arlington and leave your car at home.

Updates provided by the City of Arlington and shared courtesy of DAMC.