The Next Great Texas BBQ Joint? Arlington's Hurtado Barbecue Company Just Might Be

(Originally produced and aired by NBCDFW)  In the span of about a year, Hurtado Barbecue Co. has gone from a virtually unknown pop-up stand to a thriving barbecue operation that typically has lines and almost always sells out in a matter of hours.

Not bad for their founder and unlikely pit master, Brandon Hurtado.

"I never anticipated that we would be doing what we're doing at the scale that we are. I'm really grateful for the people of Arlington and beyond for coming out and thinking our food is good enough to support us." 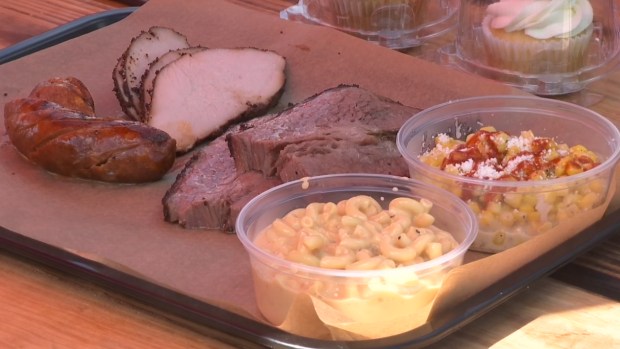 "I never anticipated that we would be doing what we're doing at the scale that we are. I'm really grateful for the people of Arlington and beyond for coming out and thinking our food is good enough to support us."

The story of Hurtado Barbecue Co. can be summarized by five simple words -- one thing led to another.

It's a phrase Hurtado uses frequently when describing his journey from digital marketer to soon-to-be restaurateur.

He first fell in love with barbecue as a kid, watching his dad make it. And as he got older, he began testing the waters himself.

He started with a small fire pit. Then as he puts it, one thing led to another, and he ended up buying a real smoker on Facebook Marketplace.

That then led to an insatiable desire to cook.

At that point, he was mostly cooking for friends and family in his backyard. But then "one thing led to another", and he and a few others in his circle started thinking bigger.

"I had this crazy idea to do a barbecue pop up event," said Hurtado.

After making some calls, he found a willing host in Division Brewing, a small craft brewery in Downtown Arlington. And so he and some his friends set up a stand and served barbecue tacos.

They were such a big hit, Division Brewing invited him back.

"And so we did another one -- and another one," said Hurtado. "And then we decided to make a leap and invest in a food trailer."

When his trailer opened earlier this year, lines for his barbecue were going around multiple sides of the building.

Hurtado knew it wouldn't be long before they'd outgrow the trailer. So "one thing led to another" -- and now, he's preparing to open a restaurant along Front Street in Arlington's Urban Union neighborhood.

"But I feel like once the restaurant opens, things are gonna change for us, for our community. People are gonna know who we are."

So what is it about Hurtado's barbecue that brings people to his food trailer in droves?

"Just putting a little bit of your own spin on the menu," he says.

Hurtado grew up in a Hispanic home -- and so many of the spices he uses in his rubs and some of the twists he puts on his side dishes are influenced by Mexican and Latin flavors.

"[People] like Mexican and they love barbecue -- and they want to blend those two things together," said Hurtado. "And I feel like we do a pretty good job of that."

He also credits some of the more unique items that he and his team have created for the heightened interest in their food.

For example -- in addition to staples like brisket, ribs, and sausage, Hurtado Barbecue Co. serves smoked quail, smoked tri-tip, and smoked elotes, among other things.

"We also make a nacho sausage, which is where we take everything that would go on a plate of nachos and we run it through a blender and stuff it into sausage casing," said Hurtado. "It's really good. It's different. And that's what I like about craft barbecue. There's a lot of flexibility and being yourself, being able to try new things."

Earlier this year, The Dallas Morning News created an online poll, asking readers to tell them who made the best bbq in DFW.

Initially, Hurtado Barbecue Co. wasn't on the list of choices they could make.

But there was a write-in option.

"And our customers and our supporters went and wrote us in as a write-in option,' said Hurtado.

By the time the field was whittled down to four finalists, there Hurtado Barbecue Co.'s name was.

"We ended up finishing third in all of Dallas / Fort Worth," said Hurtado. "The fact that people care about us enough and loved our food enough to vote that many times -- I think we had over 5,000 votes -- that's just insane to me."

Not so insane to their loyal customers.

Dennis Law is in their line almost every Saturday.

"Occasionally I'm here twice a week, depending on what he's got going on," said Law, who lives in Arlington. "Just the quality, the consistency, and the passion that you see in these folks -- it can't help but convince you that you want to come down here."

Doug Colcord and his wife try to eat at a different bbq joint every weekend. Once they had Hurtado's food, they admit they don't get to as many places as they used to -- because now they're there every weekend.

Hurtado's restaurant is set to open by the end of 2019.

While the renovations there continue, he and his team set up their trailer just outside the building every Friday night at 5 p.m. and every Saturday at 11 a.m. -- and serve barbecue until they're sold out.

"More than anything I feel blessed to be here and serve people like we do," said Hurtado. "So I'm really glad this is the path that we've been led on."

Story produced by Tim Ciesco and broadcast on NBCDFW on August 30, 2019. Photo by NBCDFW; rendering from Hurtado.