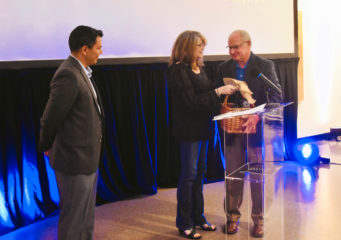 Debi Knoblock, Assistant Vice President for Business and Community Engagement at Texas Trust, presented the Dream Builder award to Bertrand. Texas Trust conceived the award and worked with DAMC to establish it in 2016 as a way to honor citizens who have had a significant and positive impact on the Downtown Arlington community.

“We’re very grateful to Debi and the team at Texas Trust,” said Aldo Fritz, DAMC President and CEO, “for their support of DAMC and recognition of Terry and individuals like him who have given so much to Downtown Arlington.”

Bertrand helped his congregation build creative spaces for their growing membership and array of outreach programs. He built relationships throughout the City through his servant leadership including his role on the DAMC Board and Executive Committee. Together with his First Baptist leadership team, he also worked hand-in-hand to build solutions and be a great neighbor to the Levitt, UT Arlington, and all Downtown partners and members.

“Arlington is home base for Texas Trust and we are proud to be connected with the DAMC,” said Knoblock. “Through the Dream Builder award, we can shine a light on what is going on with the DAMC and highlight the people that are making Arlington the American Dream City.”