What makes Downtown Arlington so special? Community. Our ever-evolving district is made up of entrepreneurs and educators, architects and artists… and we’re just getting started. 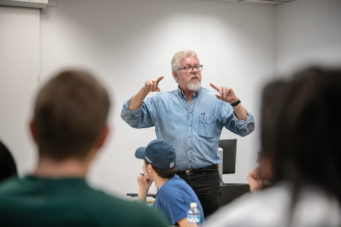 Throughout his career, Don has worked to advance architecture as both an educational discipline and design practice. In recognition of his efforts, Don was recently named to the prestigious College of Fellows by the American Institute of Architects. He received the honor, noted Texas Architect Magazine, for “elevating architectural education by emphatically connecting architecture schools to the public and to the profession, and by helping to provide opportunities for students of diverse backgrounds.”

If you had the chance to talk with an architectural visionary, what would you ask him? We asked him about his first job and ideal dinner party companions. Of course.

Downtown Arlington:  What was your first job?

Don Gatzke: Golf caddy at age 13. I was terrible and could never see the ball after it was hit.  Then paper routes, then a tire recapping outfit. For two years in high school, I was the photographer for the weekly newspaper in town, which got me access to a car and every sporting event. I took lots of pictures of Rotary presidents, dead deer, prize-winning fish, and bad car accidents on the highway.

DA:  If you could invite four people to a dinner party (non-family, living or deceased), who would they be?

DG: Fibonacci, Mark Twain, Eleanor of Aquitaine and Bruce Springsteen. But if you asked me tomorrow, it would be a different group.

DA:  How did you become interested in your field of study?

DG:  As an undergraduate in the late 1960's/early 70's, I was a journalism student and got a degree in political science. When I got burned out on politics, I decided I wanted to do something that hurts when you run into it. Also, I had a girlfriend that took me to a documentary film series on architecture. That got me going. Then my mother reminded me that as a kid, my favorite place to go back home in Virginia was Colonial Williamsburg. I still think it’s kinda neat, even if it's pretty much a 20th century fantasy of what the town was actually like.

DA:  If Hollywood made a movie about your life, who would play you?

DG:  It would be a very boring movie, so it could be anybody.

DA:  What advice would you give someone who just moved to Arlington?

DG:   Build a nice contemporary home designed by an architect. Arlington's about to become a very hot community. It’s the perfect location in the region, with a great university and nicely maturing neighborhoods.

DA:  Where is your favorite place in Downtown Arlington to meet friends?

DA:  If money was no object, what’s one thing you’d like to see happen that would further the revitalization of Downtown Arlington?

DG:   Build a new, gritty facility for the Arlington Museum of Art that would include facilities for artists and patrons of the arts to work, produce and exhibit. Use it as a keystone to an arts-oriented Downtown revitalization.

DA:  If money was no object, what is one thing UT Arlington could do to further leverage the assets in Downtown Arlington?

DG:  See my answer to the question just above. Partner with the AMA to foster a community of working artists.