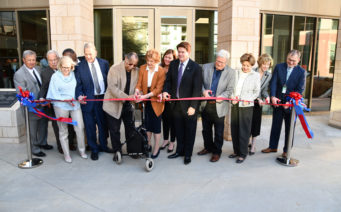 “It’s terrific to see all of the growth happening in Downtown Arlington,” Cluck said, “and I know that in this new City Council Chamber, our Mayor and Council members will make the decisions to continue the growth of Arlington – downtown and city-wide!”

In addition to City Council meetings, the new Council Chamber will be used for Planning and Zoning Commission meetings and serve as a community room available for library programming, public meetings and other events.

“We’re thrilled to be able to provide a place where residents can come to watch our local government in action and to provide feedback on projects happening throughout our community,” Williams said.

The new Council Chamber was built as part of the $34 million Downtown Library project, which will open on June 16. A new plaza connecting City Hall and the Library will open in May.