Gavin Mitchell, student body president at The University of Texas at Arlington, has big dreams for Downtown Arlington. 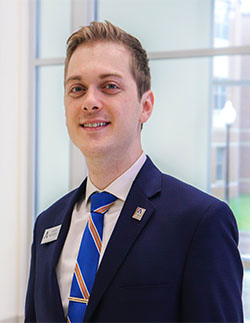 “I would love to see Downtown Arlington develop into even more of a business powerhouse and a cultural hub than it already is today,” said Mitchell, a senior from Ft. Worth majoring in Information Systems. “With its location in the middle of DFW and next to a premier university, I can see Downtown as a center of business for the metroplex and a center of activity for every student going to UTA.”

That’s exactly what Downtown Arlington and its Board had in mind when it formed the MOD Squad, a UTA student action committee charged with connecting Downtown and their peers. The MOD (Mavericks of Downtown) Squad is currently made up of six students, and with campus leaders like Gavin as inaugural members, the organization is poised to expand its membership once the fall semester begins on August 21.

Maggie Campbell, president and CEO of Downtown Arlington, said she envisions the MOD Squad as a representative body that creates meaningful connections for students with Downtown’s business community while becoming knowledgeable “ambassadors” for downtown to their fellow students.

“UTA is and has been a huge driver of our ongoing prosperity in so many ways,” said Campbell. “Students, faculty, staff and alumni are among Downtown’s biggest employers, residents, patrons, employees, visitors and customers. The MOD Squad will help students also become Downtown’s biggest fans.”

What advice does Gavin have for students as they return for the 2019-2020 academic year?

“Explore all that Downtown has to offer, then tell your friends!” Gavin said. “I’ve experienced tons of fun – and had some amazing food -- in Downtown Arlington, and I didn’t have to drive 30 minutes to get there."

"The biggest piece of feedback I’ve received from students about Downtown," continued Gavin, "is simply not knowing what’s there. The only way to know is to try. You’ll be surprised at what you find!”

If you’re looking for Downtown Arlington selfie inspiration, start by perusing these ideas on our website:

Ten Ways You Can Beat The Summer Heat In Downtown Arlington

Urban Union — Which Is Bringing Spotlight, Crowds To Downtown Arlington — Is Ready To Expand

Get Involved in the MOD Squad

UTA students interested in getting involved in the MOD Squad can email Gavin at gavin.mitchell@uta.edu or Katie Gosa at katie@downtownarlington.org