In Praise of Downtowns

When you're alone and life is making you lonely

You can always go downtown.

When you've got worries all the noise and the hurry

Seems to help I know downtown.

Just listen to the music of the traffic in the city

Linger on the sidewalk where the neon signs are pretty

How can you lose?

The lights are much brighter there

Things will be great when you're downtown

No finer place for sure downtown

Everything's waiting for you.

- “Downtown,” Lyrics by Tony Hatch and recorded by Petula Clark in 1964

Years ago when I first read Bowling Alone: The Collapse and Revival of American Community by Robert Putnam, it had a profound impact on me. The author suggests that because Americans are becoming less and less involved in traditional civic and social groups – like PTAs, Elks Clubs, churches, veterans’ groups, volunteer organizations and bowling leagues – they’re becoming more and more isolated. Technology, overwork, suburban sprawl and other factors only make the problem worse.

We’re not “bonding” anymore, Putnam argues, so we’re losing the sense of community that a democratic society needs to function. We’re together, but we’re alone.

As an urban planner, I’ve seen the physical signs of that isolation in cities across the country. They say that people vote with their feet, and when feet stop moving altogether, public spaces become forlorn, then obsolete.

Today, however, I have a much more optimistic view, thanks to Downtown Arlington.

I spend time in Downtown every day, and I’ll tell you what I see. I see teams of kids in soccer uniforms, their coaches and parents at J. Gilligan’s, celebrating the big win after the game. I see co-workers bonding over office politics, a laugh and a drink at Hooligan’s. Kids forging friendships at Theatre Arlington summer camp. Entrepreneurs brainstorming together at the Chamber, PinnStation and CenterSpace. Families putting down their smart phones and meeting up with other families for a concert or movie on the Levitt Pavilion lawn.

I see citizens gathering for Arlington On Tap discussions. Thousands of 5K runners and walkers raising money for charitable causes in races held in Downtown year-round. Rotary members wrapping up a community service day at Legal Draft. First Baptist Church members catching up with each other over lunch at Flying Fish. UTA students volunteering at Mission Arlington. Philanthropic organizations joining forces at Arlington Gives. Leadership Arlington classes giving back to the city.

Vibrancy, diversity and relevance: that’s why urban centers brought people together in the past, and it’s up to us to release that potential again even in spite of the built-in paradoxes.

Downtown Arlington, for example, is the historical center of our city as well home to UT Arlington, one of the most future-oriented Universities in the country. A place where long-time Arlington neighborhoods -- such the Heart of Arlington Neighborhood Association and Oak Hill -- nestle alongside brand-new student living communities whose residents hail from around the world. A place of abundant restaurants and philanthropies serving the homeless. Artists, musicians and creative types flourish in our Cultural District and, thanks to UTA, I bet we have more engineers and scientists per square foot than anywhere else in the city – and maybe in the state.

Downtown’s future depends on its willingness to change and its ability to stay the same. What do we do next? Be informed, get involved, stay involved. That’s the marathon I’m inviting you to run with me and DAMC and our great City.

In the meantime, let’s keep showing our kids places where old meets new, where creativity flourishes, where problems and solutions coexist, and where people exchange opinions and ideas in a genuine desire to make their community better. Let’s show them what life was like before Facebook and Snapchat. Let’s teach them what it means to be together, together. 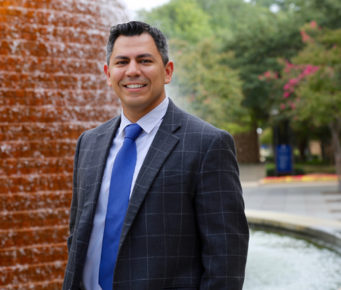 Aldo Fritz is the President and CEO of the Downtown Arlington Management Corporation. A certified planner by the American Institute of Certified Planners (AICP), Fritz holds a Bachelor of Arts in Communications and a Masters in Urban and Regional Planning from Florida Atlantic University, and a Masters in Real Estate Development from the University of Texas at Arlington. He and his wife live in Arlington.