He Was the City's Game Changer: A Tribute to Michael Jarrett

(reprinted with permission from the author)  Michael Jarrett loved solving problems. One solution he never had to find was having enough time for the friends, families and communities he loved.

Sometimes, that meant driving across the state when one of his daughters, Melanie Jarrett, played softball at UT Austin. Other times, he looked for excuses to go into work as president of Worthington National Bank's Arlington branch, or livening up a finance committee briefing during myriad nonprofit board meetings. At all times, his family said, he made time for everyone and everything in his 72 years of life.

Michael Jarrett died Thursday morning in a single-vehicle crash along Abram Street. The news made ripples in a community where Jarrett was constantly on the go and perennially involved with city philanthropic and economic development efforts with groups including Downtown Arlington Management Corporation, Arlington ISD Education Foundation and the Greater Arlington Chamber of Commerce. 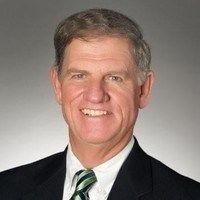 Mike was the living embodiment of a game-changer," wrote Greg Morse, bank president. "We were able to learn from him over the ten years we were fortunate enough to work with him. Being in banking for 51 years allowed him to share with us his knowledge. Our bank family, including our customers, will miss him and his God-given talents."

Jarrett was a banker for 51 years, over 10 of which he spent at Worthington. His career sent him and his family to Odessa, Lubbock and Dallas before returning to Arlington. He held a bachelor's degree from UT Arlington and a master's from Southern Methodist University. He grew up in Fort Worth.

"Just as a father, as a businessman and as a community leader, he left a lasting legacy that we're all proud of, and it points to a life well lived," said chamber of commerce president and CEO Michael Jacobson.

Despite pandemic-fueled economic downturn and the unpredictable effects of a municipal election held during federal elections last November, more than 55% of voters approved the increase, and the corporation came online in late spring.

"(Former Mayor Jeff) Williams picked the right person to chair that campaign, and of course, we won with a more than comfortable margin," Jacobson said.

Jarrett raised millions of dollars for Arlington groups, Jacobson said, and was the perfect chair for any finance or fundraising committee.

Maggie Campbell, president of Downtown Arlington Management Corporation, said her favorite memories of Jarrett revolved around the group's finance committee meetings, including one he attended the day before his crash.

"He brought some fun into it," Campbell said.

Jarrett also brought fun to the bank. Hagan remembered walking in on her father leading someone on a tour of the Worthington building at 200 W. Main St. The building was once Arlington's first post office, established in 1875 and repurposed as a school district tax office before becoming a bank. Jarrett conjured its storied history with aplomb, Hagan said.

"He didn't have notes or anything," she recalled. "It was like he was in his element because he was talking about something that he loved and sharing that with this woman who wanted to know about its history."

Arlington leaders and communities have gathered around Jarrett, who spent the better part of his life rallying for them, his family said. His daughters' friends drove in from out of town because he had become their second father. Teresa Jarrett and her daughters' phones have been inundated with condolences.

Jacobson texted Michael Jarrett after hearing a bank employee was in a crash before he knew the call was about his friend and colleague. He and his friends toasted Jarrett on Friday afternoon, following the golfing match Jarrett was supposed to attend.

"He showed up for so many people, it's been really unbelievable to see how they have been showing up for him," Hagan said.

Their father made friends everywhere he went and never knew any person to be a stranger, Melanie Jarrett said. The man was bound to know a face when he walked into a restaurant, no matter in Arlington or in west Texas. He found his way over to tables during his birthday dinner Nov. 6 in Fort Worth to greet friends.

"When it came to the community, we nicknamed him the senator," Jarrett said.

Despite his prolific community presence, their father was a family man who loved his two grandchildren, Hayley and Jarrett, and he and his wife's two dachshunds. He loved vacationing with his family — he, Teresa and his kin had planned a trip to Walt Disney World for Dec. 17, and recently celebrated Hagan's birthday in Cabo.

"Even though this is so devastating, we never could have ever had any doubt about how he felt about his family," she said.

Christmastime was his favorite holiday, and he loved setting up lights around the home. Earlier in the week, Michael Jarrett had labored over holiday lights on the front yard bushes that were out of sync. Thursday evening, the lights lit up on time and in sync — a reminder of his commitment to the season, his family and another problem solved.