Green Room Antics, The Board Member Mambo, and Potty Time

Reflections on Ten Years of Music Under the Stars

What began as a dream has become a dream come true for Downtown Arlington. Since its opening night a decade ago, the Levitt Pavilion for the Performing Arts has been sharing the love of music with, on average, more than 100,000 people every year. All genres, all for free, all in a setting that’s tailor-made for creating connections and building community. In fact, many have called the Levitt Pavilion Arlington the crowning jewel in the revitalization of Downtown. 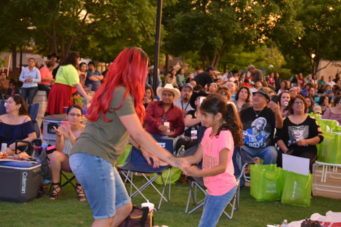 While it might be celebrating its 10th anniversary, the Levitt's giving us the present in the form of its 2018 Summer Concert Season. We're particularly looking forward to opening weekend with Ray Wylie Hubbard, Light Up Arlington! concerts, and Downtown Arlington Music Fest (formerly known as Center Street) featuring Texas State Musician Joe Ely, Bowling For Soup and Delta Rae. DAMC is proud to sponsor Downtown Arlington Music Fest, which is June 8-10.

Since before the first band (Brave Combo) took the stage in 2008, Patti Diou has been the Executive Director of the Levitt Pavilion Arlington. Since she’s literally seen it all, we asked her to share some of her favorite moments from the last decade of music under the stars:

Downtown Arlington:  What are some of the funniest green room requests you've received?

Patti Diou:  Bands sometimes put funny requests in their riders just to see if you read them. One band requested a goldfish bowl filled with Swedish Fish candies and exactly two gummy bears to be hidden among the fish. Another wanted a poem about a dog written by somebody’s sister.

We’ve had other requests that were required and not as funny, like 72 bath towels... and we don’t have a shower. The band used them to cover every surface of the green room. Another band requested food that wasn't available in Texas, so we had to order it online. They didn’t eat any of it. We served it at our next board meeting.

DA:  Of the performers who have returned to the stage for more than one season, who have been extra fun to work with?

PD:  The list really goes on and on! Here are just a few: We love working with Ray Wylie Hubbard. He’s a wonderful story teller and our audiences always look forward to seeing him at our venue.

Ruthie Foster is another artist that our audiences love to see. She’s a treasure, one of the most soulful, incredibly talented artist we present, and she’s the nicest person you could ever meet. Radney Foster always delivers a stellar performance and is another one of the nicest people to work with. Last but not least, Brave Combo. They opened our venue in 2008 and we continue to book them every opening night in the fall. Our crowds love to come out and do the chicken dance, the hokey pokey and the conga line. It’s one of the most fun evenings every year.

DA:  In all the years that you've run an outdoor music venue, it's amazing how few shows have had to postpone or cancel.

PD:  I particularly remember the night we first hosted Radney Foster. When he arrived, it was pouring rain. I was determined that the show must go on because we're contracted to pay our artists rain or shine.

Radney and his band didn’t complain at all. They set up for the concert, and we started to do the sound check. Two diehard fans huddled under umbrellas at the front of the stage. It was miserable. Finally admitted that the rain wasn’t going to stop ,and we called the concert off. Radney was a hero and agreed to do an acoustic concert at J. Gilligan’s for our sponsor and anyone else in attendance. It turned into one of the most memorable evenings and to this day our sponsor fondly remembers that special night.

DA:  Who on your board is the best at dancing along with the band?

PD:  Teresa and Terry Gaines are by far the best at dancing. They attend so many of the concerts and such great supporters. It’s a joy to watch them have a fun time at the Levitt! We are so fortunate to have the best board of directors, the best crew and the best volunteers.

DA:  Feel free to namedrop any groups who were up-and-coming when they performed at the Levitt and have since made it big.

PD:  Pentatonix. We were fortunate to have booked them twice before they really blew up. We would love to bring them back to the Levitt. We tried to do it for our anniversary but just couldn’t make it work. The Turnpike Troubadours is another band that’s really hit it big.

DA:  It's potty time! Give a quick update on your current fundraising campaign.

PD:  Our capital campaign to fund indoor, air-conditioned bathrooms is well under way. To date we’ve raised $1.8 million of our $2.2 million goal, and we’ve just started crowdfunding. Our goal is to raise $75,000 in the next four weeks. We have unique gifts for each level of giving. The best gift is having your name on a restroom stall. Who wouldn’t want that?

Summer’s Hot at the Levitt

Visit the Levitt Pavilion Arlington website for all the details. See you at the Levitt!