Friday nights are family fun nights for my family. However, a collective thought from my family on what is fun has become increasingly difficult to decide.

My three boys vary in age from 4-16. Because of the age gap, what is cool is different for each one.

So one recent Friday night, I decided where we would go: Theatre Arlington, located at 305 W. Main Street. 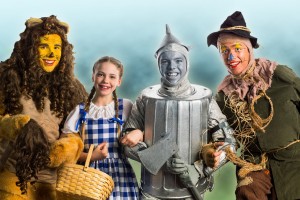 The boys and I went to see OZ!—a musical that, according to Executive Director Todd Hart, was completely produced by children ages 8-18.

I was apprehensive at first because my children are used to movies that you watch on the screen, and because we are all so chatty, we never go places where you have to be quiet.

Also, I was unsure if they would like OZ! They usually watch action movies or cartoons. The musical didn't disappoint us, except for my 11-year-old, William Horton.

"It was just meh," he said. "If I had done it, I would have added more explosions."

Of course he would. There is one little pop and sizzle when the Wicked Witch of the West first appears, but it wasn't enough to please William.

Harrison, my 4-year-old, was impressed. He liked the costumes, the songs and the characters, but it scared him a little.

"The monkeys and the lady with the green face (The Wicked Witch of the West) were scary," he said. "My favorite character was the robot (Tin Man) because he moved with oil."

The monkeys are the flying monkeys that are in the movie. In one scene they wear masks that are a little scary; Harrison didn't like the masks.

Another challenge of going out with my family is that my oldest son is non-verbal and autistic. OZ! entertained him. He danced in his seat to some of the songs, laughed at the characters, and clapped when the Wicked Witch of the West melted. When I asked him if he liked the show when it was over, he nodded yes.

OZ! ended its run March 10, but Theatre Arlington has several other plays in the works. The next all-youth play is Charlotte’s Web, which runs July 12-21.

Theatre Arlington has produced plays for the past 40 years and is very popular in the community. Plan your visit ahead of time and buy tickets at least a week in advance; seats sell out quickly.