Through a gift of paint and materials, The Sherwin-Williams Company and The Sherwin-Williams Paint Stores of Arlington will support the creation of two murals in Downtown Arlington by two accomplished artists. The murals will be completed by mid-September in time for a VIP dedication event and Brewing Arts, a free art festival featuring each of the artists and their work. 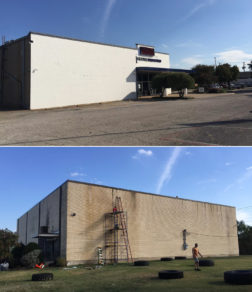 The first mural will be created on an exterior wall of Theatre Arlington, 305 W. Main St., by Arlington resident Justin Simmons. Simmons’ work is already known in Arlington through his participation in the City’s popular Star of Texas public art initiative. His Star entitled America’s Pastime depicts the Texas Rangers and is installed near Globe Life Park.

The second mural will be created by North Texas-based Dylan Kennedy on an exterior wall of Dyno-Rock Indoor Climbing Center, located at 608 East Front St. A member of the International Decorative Artisans League (IDAL), Kennedy works as a full-time artist whose interest in creating mural paintings was inspired by the frescoes and public street paintings he saw during his travels to Italy and Brazil.

The Downtown Arlington Mural Project is an initiative of the Downtown Arlington Urban Art Movement. Launched in 2018, the Urban Art Movement stimulates creative activity that enhances the overall vitality of Downtown Arlington while uplifting community, the arts and artists. Through a proactive mix of initiatives including the Mural Project, the Movement connects and unifies Downtown’s sense of place through the creation of unique monikers that inspire and motivate, and meaningful experiences that bring people together from across the city and around the world.

About the Downtown Arlington Management Corporation

Since November 2007, the Downtown Arlington Management Corporation (DAMC) has operated as a private, non-profit community development organization whose purpose is to forge alliances between property owners, business interests, residents and the City of Arlington to improve and enhance the economic vitality and overall environment of Downtown Arlington. DAMC is professionally staffed and is governed by a Board of Directors, which is composed of a cross section of stakeholders and community partners.