Beyond Color: Ansel Adams at the Arlington Museum of Art 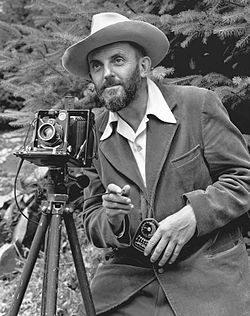 As a young boy in San Francisco, Adams preferred exploring in nature and collecting bugs, rather than sitting in a classroom. He was often described as hyperactive and inattentive which led to rejection from many private schools. Adams' Aunt Mary and his father became his tutors. His Aunt was an advocate of women's suffrage and abolitionism, ultimately influencing his education. His father believed in non-traditional practices and took him to exhibits. Since a young age, Adams was taught to be socially and environmentally responsible. One of his photographs on display at the Arlington Museum of Art (AMA) captures his aversion for the imprisonment of Japanese-Americans during WWI.

In 1941, Adams was commissioned by the US Department of Interior as a photo muralist to document the National Parks of America. Some of his most iconic photographs of Yosemite are on display at the AMA.

The AMA currently has 48 out of the 70 photographs Adams chose for display. No gallery or museum will be given the exact same 48 photographs. So if you have seen his work before, it is important to check out other exhibits because there will be something new. And if you've never seen his work or haven't even heard of him, trust us, you'll be impressed. Take a second to think about the technology that was available during the 1920s - 1940s. Adams didn't have photoshop. He had a keen eye, dedication and superior craftsmanship in a darkroom. Surprisingly, the lack of color in his shots allow the viewer to really feel the weight of a particular landscape. By using only black and white, Adams has much more control, which ultimately allowed him to visualize the portrait before it was even captured. He's able to make a mountain look how it feels.

Even if you're not one to do anything 'cultural' or 'artsy', please take the time to visit Ansel Adams: Masterworks. The Arlington Museum of Art has worked painstakingly to make sure this exhibit is displayed correctly. The photographs are spaced and laid out for optimal viewing and the lighting is just right to preserve the quality of Adams' work. Seth Wade, the office manager/graphic designer/ media coordinator for the museum said they've had people come multiple times already because they've enjoyed it so much. Attendees from 20 + states and 8 different countries have already visited the exhibit. Make sure to allow approximately 2 hours to get the full experience, there's a 100 minute movie on continuous play, providing background information on his work and personal life.

“Life is your art. An open, aware heart is your camera. A oneness with your world is your film. Your bright eyes and easy smile is your museum.”