The making of a legend doesn’t come easily, and it doesn’t happen quickly. It takes vision and tenacity, often over the course of decades and sometimes even generations.

This is the ongoing story of Arlington Music Hall.

History of the Arlington Music Hall

Built in 1949, this beautiful venue was considered the “go to” place for movies and live entertainment. Over the decades, AMH evolved into a music mecca, welcoming superstars such as George Jones, Willie Nelson, Loretta Lynn, Rick Springfield, Clint Black, Wynonna Judd and Leann Rimes, as well as the long-running Johnnie High Country Music Revue.

In 2008, Burk Collins bought the property from Johnnie High and initiated a series of major upgrades which doubled the stage size and increased seating capacity to just over 1,000. In 2015, Ft. Worth City Councilman Cary Moon and his investment group Center Street Complex LLC seized the opportunity to purchase Arlington Music Hall, as well as the adjacent Babe’s Chicken Dinner House building and two nearby development tracts.

Today, under its original marquee and with upgrades to the building, sound and lighting, Arlington Music Hall is a state of the art facility that hosts a wide range of entertainment including country, pop, rock and classical music, plus comedy, musical theatre and private functions. The program schedule is robust, and the guest experience enhanced. AMH is also home to Symphony Arlington, whose professional ensemble and visiting artists present a season of masterpieces, new works, holiday favorites and children’s programming.

In addition to new ownership, Arlington Music Hall is under new creative direction. Claud Smith, III recently joined the team as its creative curator, bringing with him decades of experience in the entertainment industry. After getting his start in Arlington as a performer at Six Flags Over Texas, he went on to perform, then write and direct for Disney Parks & Resorts and Disney Cruise Line. He has also worked creatively with Six Flags Show Productions, Nickelodeon Recreation, Viking Cruises and Busch Gardens in Tampa, Florida.

Perhaps not entirely coincidentally, Cary Moon was Claud’s student during his stint as a choreographer and teaching artist at Burleson High School. Together again. Downtown Arlington chatted with Cary and Claud about carrying the torch for Arlington Music Hall and their vision for the future of this downtown legend.

DOWNTOWN ARLINGTON: Cary, you've lived close to downtown Ft. Worth much of your life. How did this influenced your decision to get involved in Downtown Arlington commercial development?

CARY: Know that the development vision is only spurred by the opportunity. For over a decade, I can recall driving by an old building and saying to myself, “That is an ugly building. I would never own a building like that.” We now have nine of these buildings; the same buildings I scoffed at in the past. But when the opportunity presents itself, you start thinking about options and putting plans together. Executing the plan and making these old town revitalization projects successful -- from Burleson to Keller to Arlington -- are the most gratifying to me personally and well received publicly.

CARY: The Music Hall has had great owners over the years. Each took a risk, and each was successful with 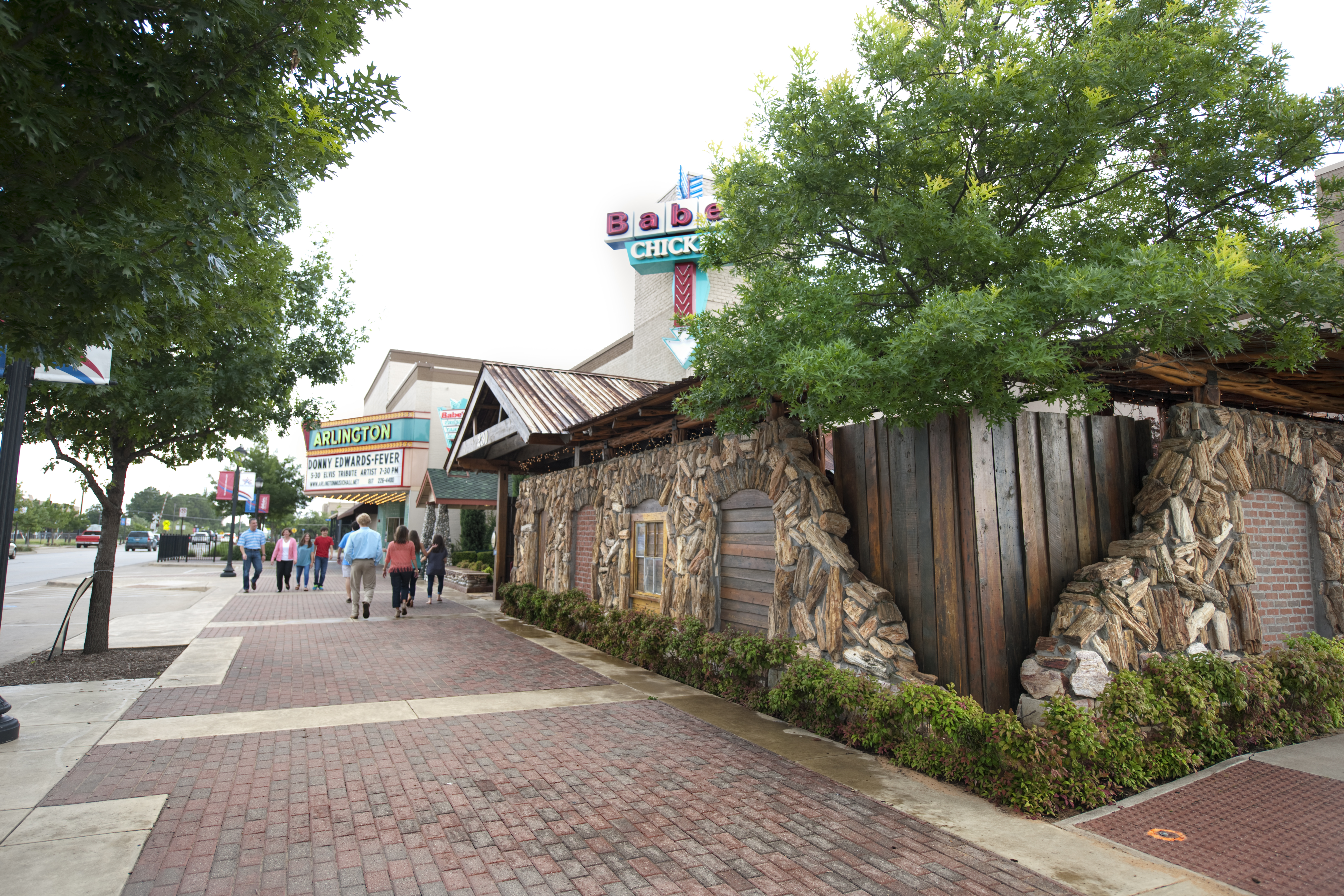 their ambition. Johnny High had the vision to convert the old theater to a Country Review show. Burk Collins had the vision to renovate the building and to add Babe’s Chicken. Our goal is to be good stewards of the Music Hall, just as the prior owners have been. We want to take the concert experience to the next level.

CLAUD: We intend to expand our brand and let the metroplex know there is something for everyone at AMH. When you check out our website, you’ll see headliners like Mark Chestnut, the Gatlin Brothers, Gene Watson, Charley Pride, Sawyer Brown, Eddie Money and Foghat. We’re also offering new Summer Fun Arts Camps for kids in grades 1-8, and this year we’ll produce our first original show called ChristmasSpectacular!

CARY: It’s a great concert venue, close-by and quaint. There’s not a bad seat in the house. With concerts starting at 7:30pm almost weekly, you can attend a concert for a short drive and not have to stay out late.

DA: Unless you go to one of the many Downtown Arlington restaurants and pubs after the show.

CARY: Downtown Arlington is a destination place. The community is tied in to downtown and enjoys it. For downtown businesses, the traffic feasibility is good and the real estate prices are low. In addition to the cost basis, what made AMH a great investment was the opportunity to develop two additional sites nearby, moving the customer experience of the Music Hall to the next theatrical level.

DA: What can you tell us about the development of your other properties in Downtown Arlington?

CARY: We’re building a tavern north of Babe’s. The tavern will have a large patio, serve plenty of cold draft beer and have a scratch kitchen. We should complete it by September 2016. One other lot is for sale with the hope of bringing a steak house to Downtown Arlington.

CLAUD: Beautifully! We’re the only venue of our size in North Texas and our location is strategically perfect – in downtown, between the AT&T Stadium, near UT Arlington, and surrounded by great places to eat before and gather after a show.

DA: What else would you like to tell us about AMH? 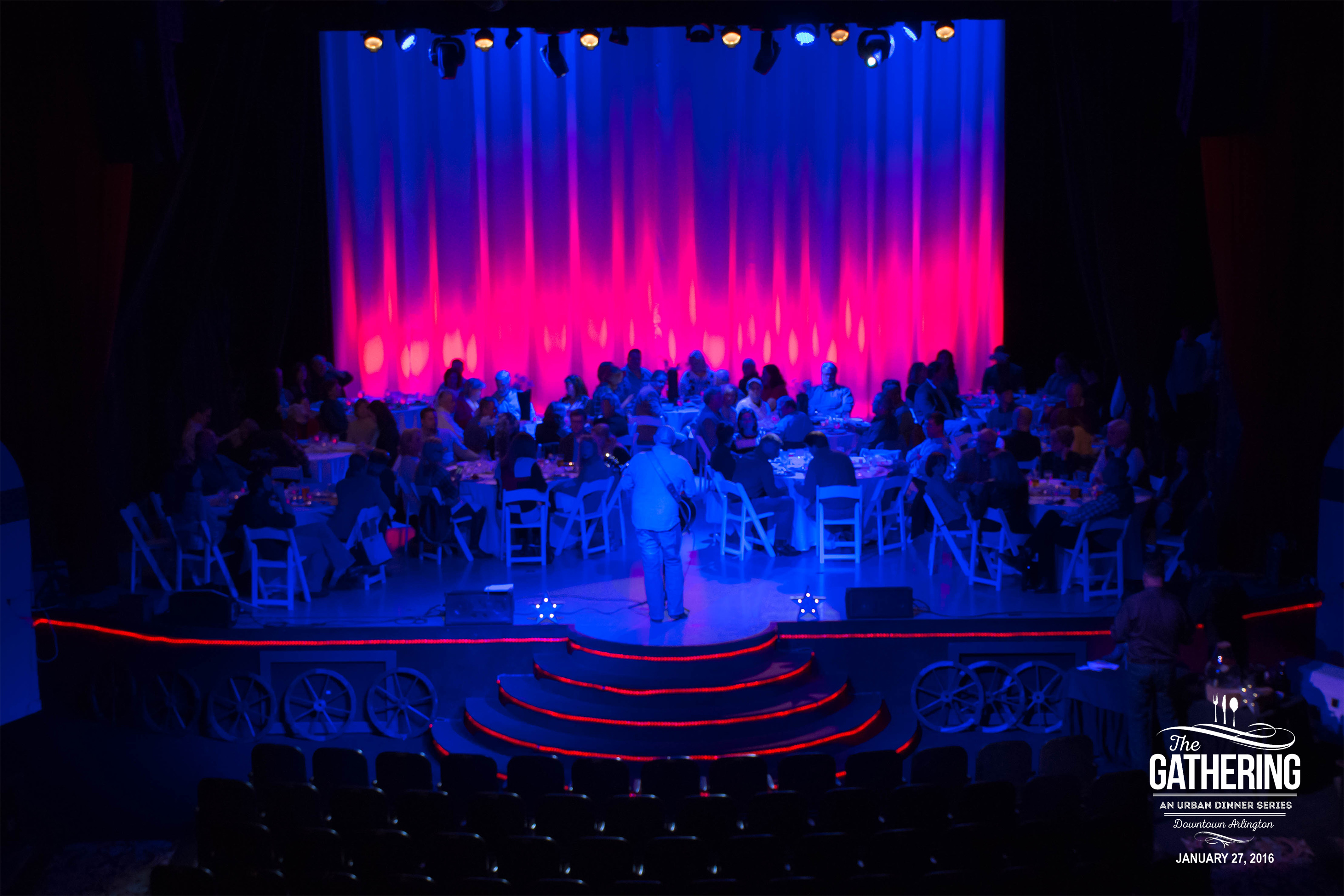 The Gathering at Arlington Music Hall[/caption]

CLAUD: Arlington Music Hall can now be rented for corporate meetings, weddings, dance recitals, unique dining experiences and other special occasions that can benefit from our location and expertise.

DA: Here are two final questions, just for fun. First, of the performances you've seen at the Arlington Music Hall, which one did you enjoy the most and why?

CARY: I’ve seen Wynona Judd, Gene Watson, Donnie Edwards (Elvis tribute show), Kansas, Tanya Tucker, Ronnie Milsap, Don Williams, Let’s Hang On and Jefferson Starship. While all were great concerts, I would have to say that getting to bring my two daughters (age 8 and 10) to see the Elvis tribute show was the best. They now know who Elvis is.

CLAUD: We recently hosted Let’s Hang On: A Musical Tribute to Frankie Valli & the Four Seasons, and they created the most fun experience I’ve seen so far. What made it different was the degree to which those performers went to engage the audience, not just in the show, but by taking photos in the lobby, autographing merchandise, and just getting to know the guests. We always strive to make the guest experience such a magical one that they will want to come back again and again.

DA: Second, of all the performances that have ever taken place at the Arlington Music Hall, which one do you wish you'd been in the front row for and why?

CARY: Kansas. They were rocking. But I really enjoy sitting further back to see the audience experience.

CLAUD: Probably Willie Nelson. He was one of my mother’s favorite performers, and I sang several of his songs when I was performing. It would have been nice to experience that with her. That’s the real reason I came back to Texas -- to invest myself in Arlington Music Hall. Music changes lives. The experiences we create at AMH can be shared by families and friends and become memories that bring people together and build relationships. No other medium does that as well as music, because it connects to our emotions. To be a part of something like that -- what more could anyone ask for?