A Lifetime of Memories: Celebrating Independence Day in Downtown Arlington

From Childhood to Fatherhood, an Arlington Local Reflects on Cub Scouts, El Caminos, and the Red, White and Blue

The first time I participated in the Arlington 4th of July Parade – now the Arlington Independence Day Parade -- I was probably 5 or 6 years old. I rode on a truck that was sponsored by the Arlington Historical Society. Next to me on the truck was Mr. (Bill) Bardin, whose family was among the first founders of Arlington in the early 1800s. My dad always says how neat it was that I rode on that float with him.

A couple years later, I participated in the parade with my Cub Scout pack. We decorated bicycles and rode or walked the parade route. One year I specifically remember all of us carrying American flags as a large group. A reporter captured it, and the photo ended up on the cover of the Star-Telegram.

My parents always remind me about the time that I was in the parade with my swim team. There were a couple of years – I was probably between 10-12 years old -- when the team had a pick-up truck entry. One of those years we put a plastic liner in the bed of my Dad’s El Camino, filled the bed up with water, and drove the entire route with the team swimming in the back. 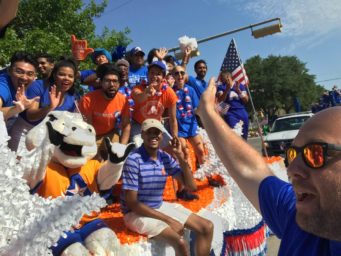 Then I hit a bit of a dry spell – it happens – until I started helping with some UTA parade entries as a part of my role in Student Affairs. First, I participated because of my advisory role with EXCEL (campus activities), then I pitched in with the UTA Alumni Association, then I helped with the university’s float. During that time, were several years where I rode on two entries in the same parade, which I think is a violation of the parade rules. Don’t tell anybody.

Actually, here’s the story behind that. Our great friends Jeannie and Will Deakyne both served in the military, and they were married on July 4. For years they celebrated their anniversary by participating in the Arlington parade. My wife Kerri and I helped them with their entry, and that’s when we would ride in the parade twice. I loved participating in the parade with Jeannie and Will because of their special story, plus it was such a great experience to share with friends. In some of those years there was a newborn in the tow vehicle. In later years, the kids joined us on the float.

Now I love going and watching the parade with my family. Nothing fancy – just simple, enjoyable time together. It’s especially fun seeing all the people you know either on floats or along the parade route.

My son Mason is eight now, and he has started participating in the parade with his Cub Scout pack. You never know where it might take him. It could give him a lifetime of independence parade memories in Arlington, just like me.

Postscript from Kerri: Seth forgot to mention his participation on the parade planning committee, the annual use of our driveway as a float build location, his service as a Grand Marshall of the parade for its fifty year celebration, and most importantly, his current role as the unsolicited commentator for those sitting near us along the parade route.

Red, White and You

Ready to make your own memories this Independence Day? Take it from Seth: Downtown Arlington is the place to be.

It’s not just a big fireworks show. It’s Light Up Arlington! This high energy Downtown tradition, which takes place every July 3, is a star-spangled event filled with entertainment, music, food, plenty of kid-friendly activities and, of course, the main event.

Before the fireworks, the fun begins at 6:00 p.m. at three kid-centric locations including Boomtown, Firecracker Alley and the Downtown Library. Carnival concessions, food trucks and all of your favorite Downtown restaurants provide an impressive array of dining options. Starting at 7:00 p.m., Donovan Keith and Hannah Kirby will be performing from the Levitt Pavilion stage.

Set up your lawn chairs and blankets anywhere along the parade route, or join Grease Monkey, Urban Union, and Urban Alchemy Coffee + Wine Bar for their watch parties. Just be sure you’re in your favorite viewing spot no later than 9:45 p.m. so you can kick back and enjoy the show.

For a complete schedule of Light Up Arlington activities and a map, visit lightuparlington.com. 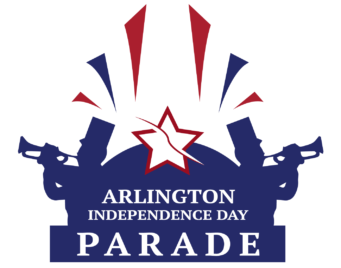 The name “Arlington Independence Day Parade” is a new one for this 53-year old Arlington tradition. The Association’s board changed the name from “Arlington 4th of July Parade” to more clearly articulate the deep sense of patriotism associated with the occasion. After holding a call for artists, the parade association board chose a design created by AISD student Nick Ward as the new logo for the Parade.

The Arlington 4th of July Parade starts at 9:00 a.m. on July 4, but any local will tell you to arrive early to claim your favorite viewing location. For a map of the parade route, restrooms, shuttle bus information, and a thorough FAQ, visit arlington4th.org.

After the Parade, head over to Knapp Heritage Park for annual Awards Ceremony, which begins at 1:00 p.m.

Don’t let the construction work on Abram St. get you down. There’s plenty of free street parking and the garage at 101 Center. Download Waze for free and see real-time traffic, find optimal routes, and avoid road closures. Or skip parking altogether and hail Via Arlington ride share for only $3, Uber, or Lyft.

Designated by the State of Texas as the Arlington Cultural District, Downtown Arlington blends a unique mix of activities, sights, tastes and sounds that attract visitors and locals alike. Within its less than a two-mile radius, Downtown is home to a top tier public research university, prolific fine and performing artists and arts institutions, live entertainment, exciting NCAA and professional athletics, one-of-a-kind dining and retail, and a supportive business climate. Keep up with Downtown news and events by subscribing to our weekly e-newsletter and following us on Facebook, Twitter and Instagram.