Visions of Dalí at the Arlington Museum of Art

Once again, the Arlington Museum of Art brings masterworks to the Arlington Cultural District. In its upcoming exhibition, Salvador Dalí: Visions of Eternity, visitors from near and far will be treated to a total of 100 works by the most famous Surrealist of all time.

Though mainly remembered for his paintings, Salvador Dalí also successfully turned to sculpture, fashion, advertising, writing and filmmaking throughout his long career, as well as becoming a master engraver who could produce equally outstanding work in dry point, etching, woodcut and lithography.

Dalí was renowned for his flamboyant personality and role of mischievous provocateur as much as for his undeniable technical virtuosity. By showing that there was no real separation between Dalí the man and Dalí the work, he paved the way for artists to think of themselves as brands. Dalí also spearheaded the idea that art, artist and artistic ability could cross many mediums and become a viable commodity. 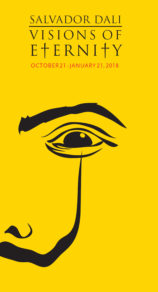 Visions of Eternity and The Divine Comedy

The namesake of the exhibition, Visions of Eternity, wails with emptiness as a shadowy figure, who’s quite literally coming apart at the seams, peers into the abyss. The pieces de resistance of the AMA exhibition, however, are the illustrations of Dante’s The Divine Comedy.

According to the article by Maria Popova, in 1957 the Italian government commissioned Dalí to create a series of 100 paintings based on Dante’s epic poem, The Divine Comedy. He was given eight years to complete the artwork, which was then to be released as limited-edition prints in 1965 to mark the 700th anniversary of Dante’s birth. When word got out that one of Italy’s greatest literary legacies had been entrusted to a Spaniard, the public outcry led the government to pull out. Still, Dalí forged ahead and completed the series in 1964.

The exhibition Salvador Dalí: Visions of Eternity opens on October 21 and runs through January 21, 2018. Hours and ticketing information can be found on the Arlington Museum of Art website.