Park Named for Environmentalist Gets Makeover, Courtesy of Bond

Two hundred and thirty-six million dollars is nothing to scoff at, so when Arlington voters approved a bond measure this past November for that amount, the city knew it was in for some changes. The historic package included public works and transportation projects, libraries, and a host of new or updated facilities for the parks department. The fire station is even getting redone.

Amidst all this chaos, a few projects stand proudly alongside Downtown Arlington Management Corporation’s goal of a more unified and appealing city center. Julia Burgen Park (Phase II for our readers who are really in the know) is one of these cornerstones. The park initially broke ground on land that was flooded by Johnson Creek in 2005 which had rendered the apartments and homes built there unlivable. City Council bought the land with federal grant money, and moved quickly to secure a master plan and design for the future park. Plans for Phase I of construction estimated the start date around August of 2015, but the council began work this year clearing debris and surveying the land.

The Johnson Creek That Almost Wasn't

In 1995, Julia Burgen, the person, headed a battle to protect Johnson Creek. The city and UTA had put forth proposals to turn the small body of water into a concrete flood drain, approximately the width of Cooper Street. Burgen wouldn't stand for this and contacted the Star Telegram writing what would later be referred to as "the most poignant piece on what would be lost." Later, long after the creek was saved, City Council decided to honor her dedication to the Texas environment by naming the 67 acre area Julia Burgen Park.

The bond set aside one million dollars for this park alone, and it’s easy to see why. Expansion and development are not strong enough words to describe the overhaul coming to Julia Burgen Park. 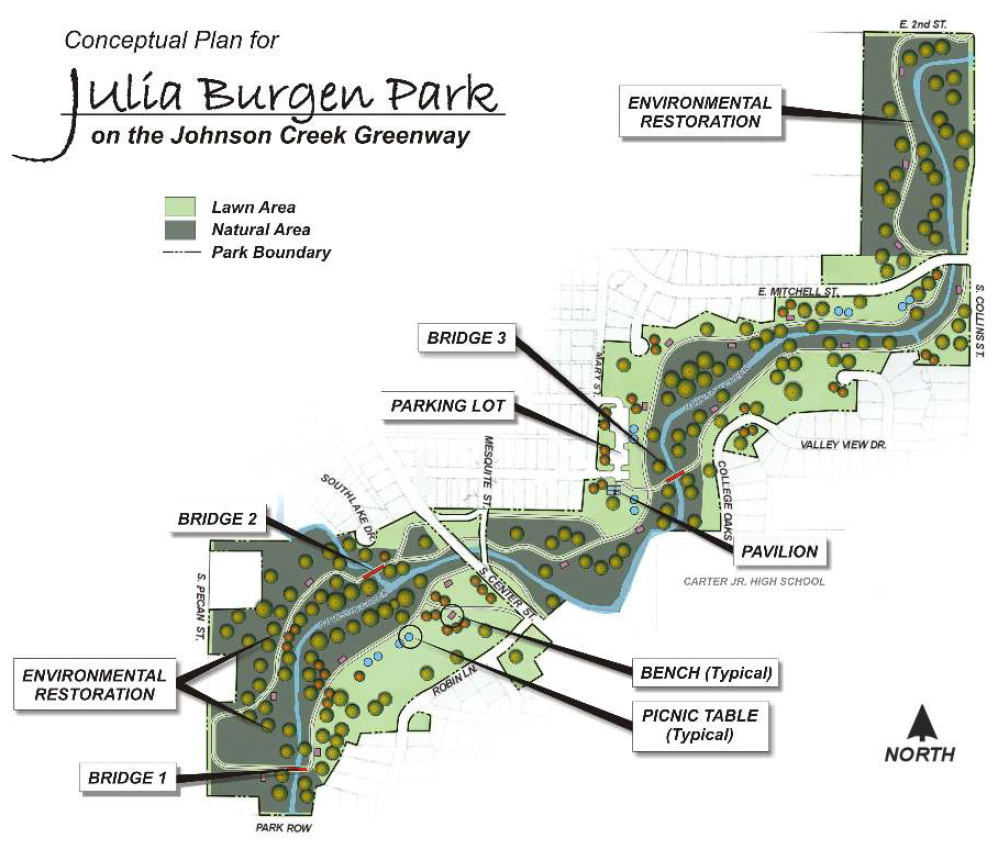 Park information and downloadable images can be found here and here.

The final plan includes natural wildlife areas, ample bench and picnicking areas, playgrounds, and tons of walking/jogging/biking paths. A pavilion area will house shaded seating which can serve as a great party destination or just a place to kick back and admire nature. This park, while adding some much needed greenery to the downtown area, is especially exciting for the residents of East Arlington, students at UTA, and the newcomers who look to rent in some of the urban living spaces Downtown Arlington has planned. Hopefully, it will serve as a future connection between South Arlington and the Entertainment District. Walkability has been a goal for the city for a some time, and Julia Burgen provides a clear pathway to do just that. Pun definitely intended.

Our blogs on the progress of Arlington aren't going anywhere. We've still got two more entries showcasing the most exciting advancements being funded by the bond proposal. Keep an eye on our Facebook and Twitter to stay up-to-date!