The study focused on institutions and organizations located in Downtown Arlington, which was designated in 2016 by the State of Texas as the Arlington Cultural District. Conducted by Impact DataSource, it was the first-ever economic impact study that focused on data solely related to Downtown’s arts and culture sector.

Eight arts groups located in Downtown were sampled for the study, including the Levitt Pavilion, Arlington Music Hall, Symphony Arlington, Miss Persis Studio of Dance, Theatre Arlington, and Arlington Museum of Art, plus the department of Music and department of Theatre Arts and Dance at the University of Texas at Arlington. Using their 2019 data, total sector annual economic impacts were calculated for:

In addition to total economic output, the study also found that the total number of jobs directly and indirectly supported by the arts in Downtown Arlington total 1,218, representing annual salaries of nearly $29 million. Local spending on the arts totaled close to $47 million in 2019, and hotel room sales generated by out-of-town visitors was just over $1.3 million. 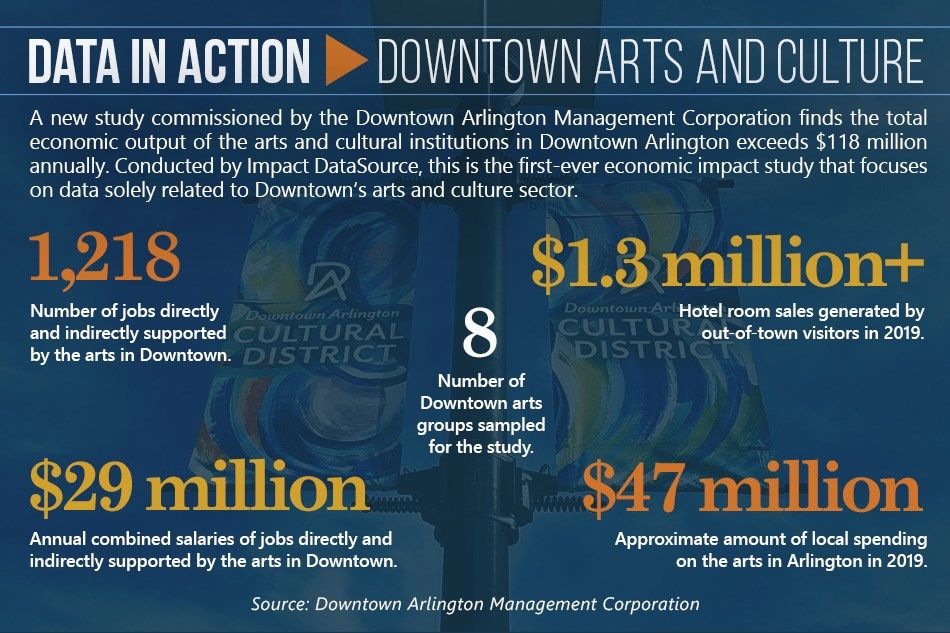 “Here in Downtown Arlington, we love the arts!” said Maggie Campbell, president and CEO of DAMC. “The intrinsic value of our cultural partners, artists and organizations is well-recognized. Now we have a data-driven picture of their combined economic impact. Clearly, the arts community is a strong and vital sector of our economy with great potential for growth and broader impact.”

Another recent study commissioned by DAMC suggests similar potential. A Downtown Arlington shared arts feasibility study, completed in August 2020 in partnership with Webb Mgmt., focused on advancing the arts in Arlington both in the short- and long-term. The study’s research showed that by nurturing the resources already in place and pursuing new partnerships, Downtown could become a nationally-recognized home for “the creation, production and consumption of art with a strong focus on diversity and inclusion.”

“Our longtime cultural partners are intertwined with our history, anchor our Cultural District, and are vital to it,” said Campbell. “Meanwhile, the growing number of ‘artrepreneurial ventures’ -- like Franklin Imagine Group, Petsche Music Group, PicturePlane, Create Arlington, Catalyst Creative Arts, and more – will continue to attract more of the creative class to Downtown and boost the economic vitality of our entire city.”

Designated by the State of Texas as the Arlington Cultural District, Downtown Arlington is where creativity, authenticity, and hometown pride thrive and drive what's next. Within its less than a two-mile radius, Downtown is home to a top tier public research university, prolific visual and performing artists and arts institutions, live entertainment, exciting NCAA and professional athletics, one-of-a-kind dining and retail, and a supportive business climate.

Infographic created by the City of Arlington.