Downtown Arlington Invites All to “Come Together” at Annual Meeting

With a little help from their friends, the Downtown Arlington Management Corporation (DAMC) took over the Arlington Music Hall on Sept. 5 for its 2019 Annual Meeting entitled Come Together. Celebrating accomplishments during the past year as well as the promise of what next year will bring, it was an evening of networking, music, food, cocktails and awards, including the debut of two new Downtown Arlington awards and their inaugural recipients.

Theatre Arlington’s Steve Morris, who served as the program’s emcee, guided guests through the program which kicked off with former Arlington City Council member Lana Wolff. She reflected on the sustained economic, creative and entrepreneurial spirit driving Downtown’s record-breaking growth over the past decade. Following her remarks, Arlington Mayor Jeff Williams exclaimed from the podium, “It’s a beautiful day in Arlington, Texas!” and added his comments on the bright future of Downtown Arlington.

Next up, young dancers from Ms. Persis Studio of Dance took the stage with a charming vocal and dance rendition of Long Tall Texan.

Maggie Campbell, President and CEO of DAMC, introduced the new video Imagine, which captured the Downtown Arlington story of renaissance and revitalization. 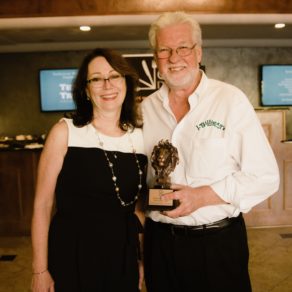 Mixing emotions with music, the event continued with presentations by Campbell of two inaugural Downtown Arlington awards. The Legendary Lionheart Award, a reference to the iconic figure of a lion in Downtown’s historic mineral well, was created to honor a local businessperson whose entrepreneurial energy and dedication to Downtown has become legendary. Randy Ford, who founded and has owned and operated J. Gilligan’s Bar & Grill in Downtown Arlington for 40 years, was the recipient of the 2019 Legendary Lionheart Award.

The new Golden Lantern Award, presented by DAMC Board Chair Amy Cearnal, was created to recognize an individual’s contributions to Downtown Arlington’s creativity, authenticity and hometown pride. Tillie Burgin, founder and long-time matriarch of Mission Arlington/Mission Metroplex, was recognized as the 2019 Golden Lantern honoree for her passion and dedication to caring for those in need. 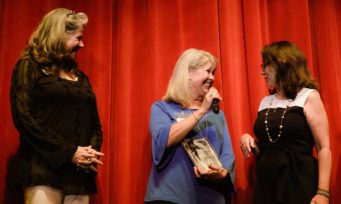 The program wrapped up with a performance by Sgt. Pepper’s Lonely Bluegrass Band, which entertained the crowd with foot-tapping renditions of Beatles classics. As fans sang and swayed along, the evening concluded with a crowd-pleasing rendition of Hey, Jude.

Amy Cearnal thoroughly enjoyed the evening, saying, “It was an exciting night to celebrate the momentum in Downtown Arlington and the history of who invested to get us here.”