On Saturday, April 6, downtown Arlington will host its third annual Downtown Crawl with bell-bottoms, disco balls and groovy discounts throughout the area. The theme for this year’s event is Retro ‘70s, and costumes are encouraged.

The event begins on the patio at the George W. Hawkes Central Library at 5 p.m. with a performance by The Taxmen, a Beatles cover band. From there attendees will be able to visit a multitude of restaurants and bars throughout downtown that are participating.

The places that are included range from food joints like Fuzzy’s Taco and Twisted Root Burger Co. to bars for the over-21 crowds, such as J.R. Bentley’s and Hooligan’s.

Each place only has discounts during certain time frames, so be sure to have the list handy. These times can be found on the event page or below. 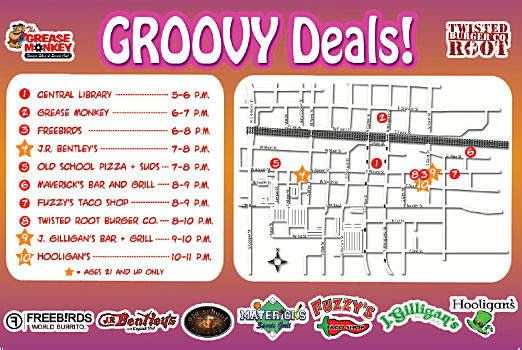 “We went last year and it was actually really cool,” said C.J. Hoochevar, who will be traveling from Fort Worth for the evening this year.

The fact that bars offer discounts is what Hoochevar and friends really enjoy about the event. They prefer being around an adult crowd but can still support the cause.

“It’s like a pub crawl for books,” Hoochevar said.

The proceeds for the downtown crawl benefit the 2013 Summer Reading Program through the public library. Participants can purchase the $5 wristband through the library’s website, or on the night of the event from 5-7:30 p.m.

While last year’s theme, Zombie Crawl, was a big success, organizers are hoping this year’s theme will create a “Saturday Night Fever” that fills the streets. Raising money for children’s literacy would just add more bell to the bottom, wouldn’t it?

“I think it’ll be just as fun,” Hoochevar said as she filled out the form to buy her wristband. “It’s for a good cause.”