Silently standing guard in Downtown Arlington is "The Man With No Eyes," the archetypal bad guy portrayed to perfection by Morgan Woodward in the film Cool Hand Luke (1967). The mural of Woodward, who passed away on Friday, was erected behind the old Curtis building a couple of years ago by Bob Johnson, chief executive officer and CEO of Pinnacle Corp., as an homage to the versatile actor.

"We installed the mural to recognize a legend with a strong Arlington connection," said Johnson. "I love his body of work, and his role in Cool Hand Luke was iconic. I'm a big Star Trek fan so for me, it was also fantastic to see him in two episodes of that TV series." 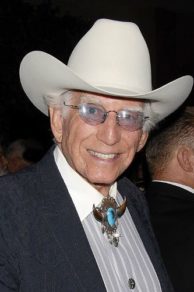 One of five brothers, Woodward grew up in Arlington, Texas. He graduated from North Texas Agriculture College, a predecessor of The University of Texas at Arlington, in 1948.

After serving as a pilot in both World War II and Korea, he eventually moved to Hollywood where his acting career took shape. Throughout his career he appeared in numerous westerns, crime dramas and television series including Cool Hand Luke and Star Trek, plus The Life and Legend of Wyatt Earp (1955), a record number of guest spots on Gunsmoke (1955), Wagon Train (1957), and played the oil tycoon Punk Anderson in 55 episodes of Dallas (1978).

Among his many awards, Woodward was awarded the Golden Boot Award from the Hollywood Motion Picture and Television Fund in August 1988. In 2009, he became an inductee into the Hall of Great Western Performers at the National Cowboy & Western Heritage Museum. UT Arlington named Woodward a Distinguished Alumni in 1969 and in 2010, the actor established a Film Studies endowment at UTA.

Biographical information cited in part from IMDB.com. Follow this link to Pinnacle's website for more information about "The Man With No Eyes."