(City of Arlington, June 26, 2019)  The City of Arlington is honored to accept a prestigious award in recognition of the transformative City Center project, which has attracted new residents, visitors and vibrancy to Downtown.
.

Additionally, the APA Midwest Section recognized the late Harry Croxton, who was a former Arlington Planning and Zoning Commissioner and a long-time community volunteer in The American Dream City, with its Planning Advocate Award.

Discussions about the innovative City Center project began in 2009, when the Arlington Public Library undertook a Central Visioning exercise. Citizens identified the need to replace the aging George W. Hawkes Central Library and expressed a commitment to keep it Downtown. In 2012, the City adopted the Division Street Corridor Strategy, wherein city leaders, staff, developers, and community stakeholders created a vision to bring more residential uses to Downtown to support a growing cultural, retail, and restaurant destination. Many of these goals are also included in the City's Downtown Master Plan, adopted in late 2018.

The new Downtown Library, located just north of City Hall, offers resources and public computers, as well as meeting rooms and a maker space. In the first six months, there were 280,000 visits to the library, 350,000 items checked out, and 1,500 public programs offered with over 30,000 people attending. The 101 Center mixed-use development across from the library provides a new housing option that did not exist in Downtown previously. 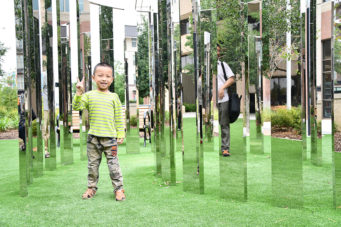 The new City Council Chambers, which is shared by the library, offers fully ADA-compliant meeting space for 200 people.

Tying the buildings together is a landscaped and inviting plaza that offers public art for the community to enjoy as well as space for large community events.

Honoring the legacy of Harry Croxton

Mr. Croxton, who passed away unexpectedly in April 2019, was an active volunteer and involved in numerous organizations in the Arlington community. His service included serving as the Arlington Heritage Memorial Grounds Corporation Board of Directors chair, as a member of the Community Influence Leaders Roundtable for the Arlington Chamber of Commerce, as past chairman of the Arlington Board of Realtors’ Governmental Affairs Committees and former Arlington Planning and Zoning Commission member.

Mr. Croxton's Advocacy Planning is still the foundation for many projects and progressive planning in Arlington today, those who worked alongside him have said.