(KERA Art & Seek, June 13, 2019) On a clear day, drivers headed to Arlington from Fort Worth might catch a glimpse of the silver AT&T Stadium dome. Dallas drivers are greeted by Six Flags Over Texas, towering above the highway. Commuters – and even Arlington visitors – may not stray far from I-30. But drive a little deeper into downtown, and you’ll find a budding local music scene.

“I just think there’s some kind of buzzy energy, and the kids here are really creative and different and not afraid to be a little bit different.” That’s Heather Williams, lead singer of the Arlington band AdamMarie.

“It kind of is a hub for all, like, this melting pot of just weird, cool culture, ya know.” 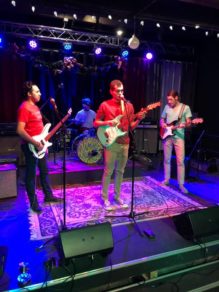 Williams and others are building a music culture in Arlington by coming to meet-ups like the monthly Chat & Do hosted by a group called Arlington Nights.

“I feel like I’ve been at the forefront and like at the ground level of this thing, and to watch it grow so much just in the last, like, four or five years has been like so much fun for me to see happen. So, I think it’s only going to get bigger.”

Clint Stephens owns Precision Printing in Arlington. He says many people don’t even know this scene exists. “Arlington is an amazing place. And it’s just that, only those connected and plugged in really see it.”

Years ago, Stephens turned the floor above his printing shop into an informal cultural space. He lets artists display their work and hosts music events.  He says the true culture of Arlington gets overshadowed by the stadiums and amusement parks. “We have this whole shroud of this gimmick city that kind of, you know, envelopes us, you know. It swallows us.”

Ron Price is the President and CEO of Arlington’s Convention and Visitors Bureau. He says tourism is a billion-dollar industry for the city and the stadiums are a big piece of that.

“I think it’s a blessing we have, you know, the Cowboys, the Rangers, and Six Flags because really when I say we’re on the world stage with some of our events, the entire world knows about us. And it’s because of those.” 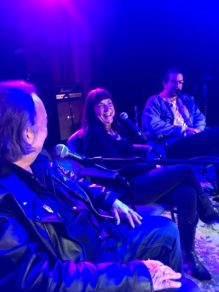 And others recognize that. Garrett Martin, Victor Toruno and Eli Tomlanovich are co-hosts of “Arlington Distorted.”

The podcast spotlights Arlington music. Martin says he understands the city’s focus. “Tourism is really good because that’s where the money comes from, you know.”

What’s missing, Tomlanovich says, is a connection between the entertainment district, along Interstate 30, and the rest of downtown. Visitors may come into town for Six Flags or a game ... “and then during the day they catch a bus or something over to downtown and they see, you know, they get a beer at Division (Brewing), they catch some cool show at Truth Vinyl.”

The city is trying to bridge that gap, says Arlington Mayor Jeff Williams. Developers have Division Street – the road that separates downtown from the entertainment district- in their sights. “Division Street has historically been used car lots and not a very interactive street. Well, investments have been made on several of the blocks on Division Street to create a development called Urban Union.” 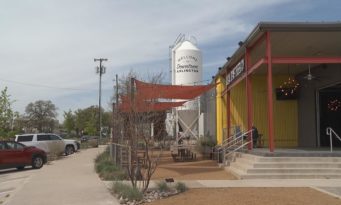 Urban Union will be walkable, with shopping, restaurants, bars and a new high school performing arts center. The plan is to open more music venues while still keeping the 1960s vibe of the area alive, says Williams. New trails for biking and walking are also in the works. That’ll make it easier to get from downtown to the entertainment district. “It’s been a vision for a long time for our entertainment district and our downtown to grow together, and that’s beginning to happen.”

Right now, the white noise of construction crews may be the city’s dominant sound. But these community organizers hear a different melody for future – more music, more art – all made in Arlington.