When John and Cindy Salter decided go into business together, there was never any doubt they’d be in the business of coffee.

In 2018, they united under common ground (pun intended): their love of quality coffee, John’s 20 years of experience in the coffee industry, and Cindy’s background in law, event planning and years of civic engagement.

“We’d often toyed with the idea of starting a business together,” said Cindy Salter, owner and managing partner of Salter Bros. Coffee Roasters. “After 25 years of marriage, with our youngest heading off to college and a looming empty nest -- combined with the thought, ‘If we’re working this hard, why not work for ourselves’ -- we knew the time was right.” 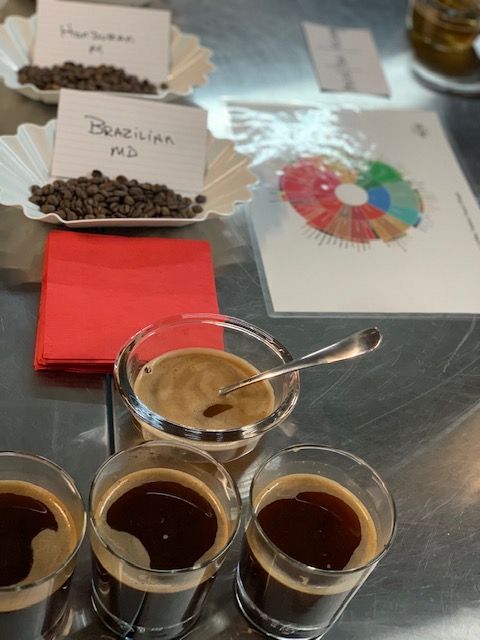 They launched Salter Bros. with a plan to import and roast small batch, specialty coffee for individuals to purchase through their online store. Soon after, they began expanding distribution to hospitality partners in their hometown of Arlington, Texas and beyond. Today, visitors to Texas Live!, Live! by Loews River Market, Mercury Chophouse, Social House, On Tap, XFL Dallas Renegades, and others can enjoy a cup (or pint) of Salter Bros. coffee, nitro cold brew coffee, or coffee stout.

Even as distribution quickly expanded, locals kept asking John and Cindy if Salter Bros. had its own brick and mortar location. “That’s what nudged us toward opening our own place,” said Cindy, “where we could not only roast, pack, and distribute to current clients, but also create a relaxing -- but also energizing -- space to serve coffee to the community and visitors to our city. The idea of having our roasters in the same space as fellow coffee-lovers drinking coffee seemed right.”

“Urban Union is an incredibly exciting place right now,” said Cindy, “with continued growth in locally owned businesses like ours and a palpable positive energy. It brings in locals and visitors every day.”

Salter Bros. has already begun collaborating with their Urban Union neighbors. Their cold brew and a coffee-beer is on tap at Legal Draft Brewing Co., plans are in the works to partner with Hurtado Barbecue, and their coffee is an option at UnionWorx and Sugar Bee Sweets Bakery.”

“In fact,” said Cindy, “we’ve entrusted Sugar Bee’s with John’s mother recipe for her famous ‘angel biscuits’ for us to serve in our Coffeehouse. Who knows? I may get brave and bring in my mom’s baklava recipe down the road.”

Mom’s recipes aren’t the only connections to family within the business. Cindy talks passionately about the sense of pride derived from putting your name on a business and taking ownership on every level. Several members of both Cindy and John’s families, including their children, are involved in Salter Bros. operations.

“(John and I) both come from large families, so there’s a natural connection for ideas and efforts,” said Cindy. “Our siblings are great sounding boards -- and tasters -- and bring knowledge both in production and marketing. As a retired US Navy officer, John’s brother Thomas’ goal-oriented, disciplined approach is a great contribution. Our niece Kim has helped with projects from early on, and she’s excited to join us in our Coffeehouse & Roastery. Our children are on board too, each pitching in where their natural talents excel. It’s really a blessing to create a business based on a dream and a passion for your product, working alongside your family.”

With their strong family ties and growing number of distribution partners, the Salters are eager to expand the Salter Bros. community. They see the Coffeehouse & Roastery not only as a place for people to enjoy drinking coffee but to learn about it.

“Those who’ve never seen a coffee roaster and bags of unroasted beans are in for a treat,” said Cindy. “On the horizon, we’ll host coffee cuppings (tastings) and fun but informative classes on the art and science of coffee, French press, pour overs, and more.”

Salter Bros. Coffee Roasters Coffeehouse will serve a variety of brewed specialty coffees, pour over drinks, nitro-infused brew, pastries and other light bites, premium iced tea, hot tea, and cocoa. In the Roastery, Salter Bros. will create their own single origin and blends of specialty coffee, an industry term for high quality coffee beans that are traceable to specific growing regions and methods. In the retail shop, Salter Bros. will offer bags of roasted coffee, mugs and other branded merchandise.

In the end, of course, it all comes down to taste. If you’ve never tried a cup of Salter Bros. coffee, Cindy offers a few tips.

“People who like a traditional, old school ‘cup of coffee’ would enjoy our Honduran Roast,” said Cindy. “It was actually the first type we roasted, and it immediately became one of my favorites. It’s smooth and balanced, reminiscent of the really good coffee I had growing up on the East Coast. For those who prefer a bolder cup, try our Brazil medium-dark. And you can’t go wrong with our Arlington Blend, named for our hometown and the city where we roast.”

Designated by the State of Texas as the Arlington Cultural District, Downtown Arlington is where creativity, authenticity, and hometown pride thrive and drive what's next. Within its less than a two-mile radius, Downtown is home to a top tier public research university, prolific visual and performing artists and arts institutions, live entertainment, exciting NCAA and professional athletics, one-of-a-kind dining and retail, and a supportive business climate.  Stay in the know by subscribing to our e-newsletter and by following us on Facebook, Twitter and Instagram.