What to say at the 37th Annual St. Patrick’s Day Celebration at J. Gilligan’s

When the green beer flows at J. Gilligan’s Bar and Grill on St. Patrick’s Day later this month, owner Randy Ford will have much more of it on hand than he did nearly four decades ago when this annual event first got its start.

“When we planned our first St. Patrick’s Day celebration thirty-seven years ago, we thought we’d just have a 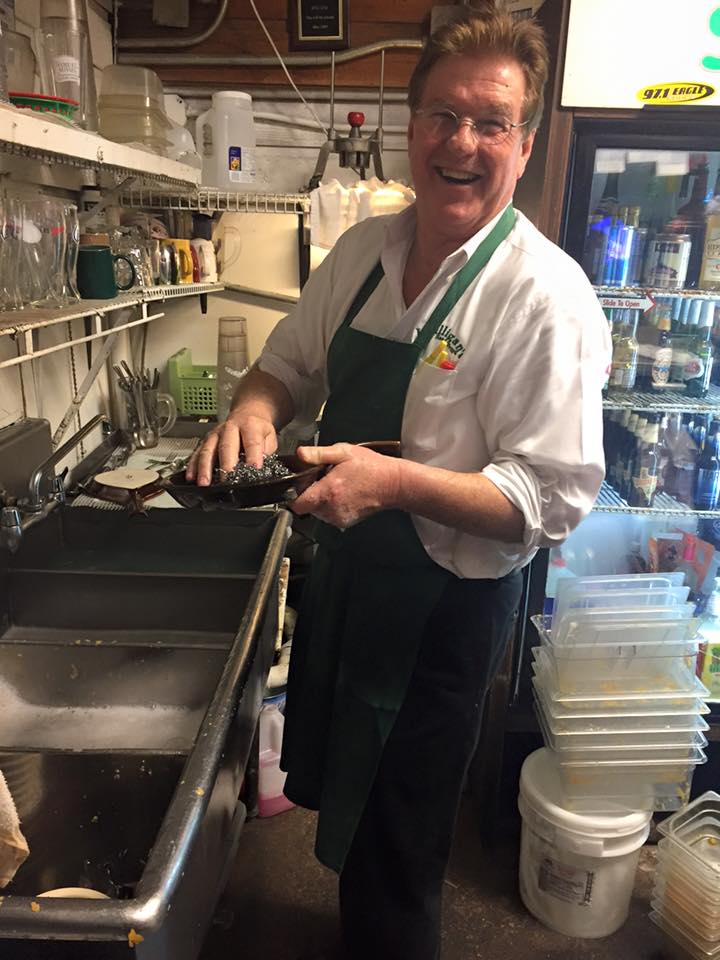 Our friend, Randy Ford, stepping in to help with the dishes![/caption]

little green beer,” said Ford. “Coors came out, put some food coloring in the beer, and one guy served it from a corner of the restaurant. About 100 people came to that event. The next year, 200 people came. Four years ago, when St. Patrick’s Day fell on a Saturday, we served over 6,000 people.”

This March, Randy expects to raise the roof in Downtown Arlington even more with activities, giveaways, and entertainment throughout the day and into the evening. Dubbed a “block party and street dance,” musicians will perform in the drafthouse, restaurant and on the main stage along Mary Street.

Country music singer-songwriter Deryl Dodd and The Homesick Cowboys, sponsored by the Levitt Pavilion, take the mainstage at 7:30 p.m. Performances by Stingray and Morning People follow the popular headliner to keep the party going into the night.

What to say when you arrive

If you’re not a local or UT Arlington alumnus, you might not know where to begin when you peruse J. Gilligan’s menu.

Just say: “I’ll start with an order of Irish Nachos.”

Locals have loved them forever, but J. Gilligan’s Irish Nacho are becoming more famous by the minute.

“Last fall, producers from the Food Network called me,” said Ford, “to tell me that Top 5 Restaurants wanted to recognize J. Gilligan’s on their ‘best bar foods in America’ episode. They came out in October to film us.”

The episode premiered on Super Bowl weekend in February, but none of the restaurants featured were permitted to promote the show in advance. “When the show aired a second time,” continued Ford, “we were able to host a watch party. I had to jump in and wash Irish Nacho plates and forks just to keep up!”

The nachos have also been featured on Bar Food Paradise on the Travel Channel and ESPN U.

“You can't buy advertising like this and if you could, you couldn't afford it,' said Ford.

What else to say

Be sure to say this one before midnight. It means “Saint Patrick’s Day blessing upon you!”

Story horse? J. Gilligan’s is the kind of place where you’re sure to bump into friends. "What's the story, horse?" — abbreviated as "story horse?" — is how you ask a pal what's new.

I’m as weak as a salmon in a sandpit. This means “I’m hungry” (to be followed by an order of Irish Nachos).

We’re sucking diesel now. When you've found success, not by luck but by your own merit, pat yourself on the back by saying, "I'm sucking diesel." What a perfect excuse to propose a toast. May we suggest…

Sláinte (pronounced sl-oyn-tah): Derived from the Old Irish adjective slán (which means "safe"), sláinte literally means "health," and is used as a quicker version of, "I drink to your health!"

May misfortune follow you the rest of your life and never catch up. Another toast, to be followed by a round of green beer. Or if you prefer, sweet tea.