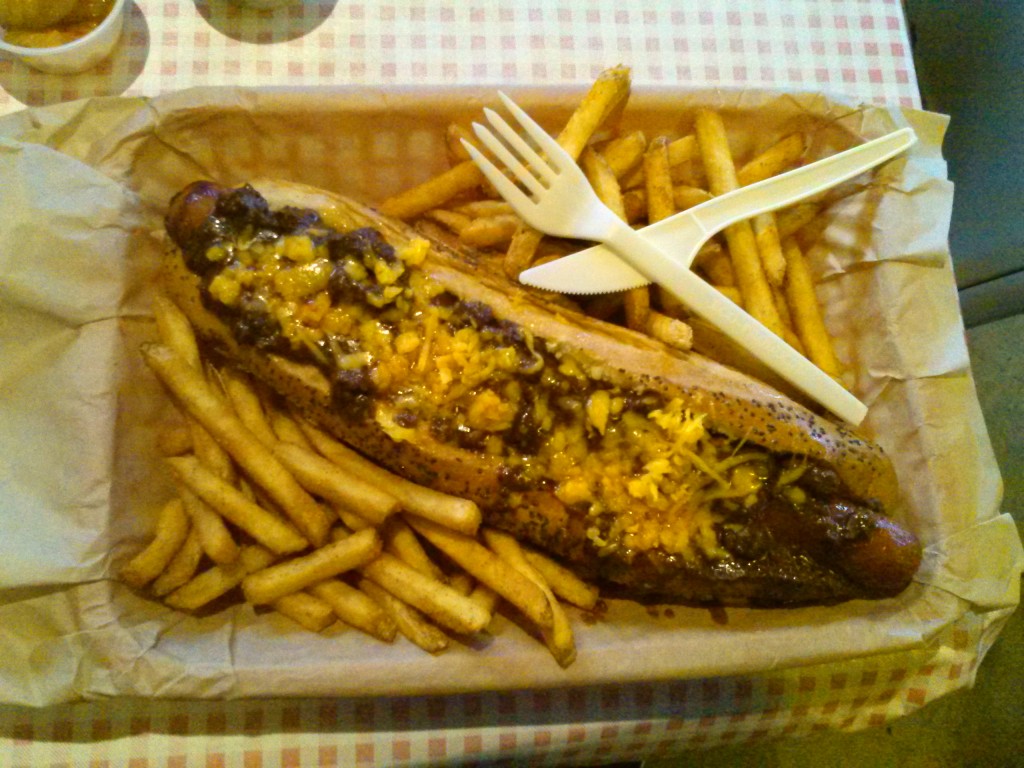 Pop Quiz, Hot Shot: You and your buddies have just cheered on the Texas Rangers as they handed out another crushing defeat to one of their chump rivals, or better yet, you’ve just sat through five “Die Hard” movies in a row at The Parks Mall and worked up a manly appetite. Where do you go?

At moments like this, a salad just won’t do (although you can still find one on the menu under “Sissy Food”). Sometimes not even beef is enough, which is why Twisted Root carries a diverse array of exotic and high-quality meats such as buffalo, alligator, emu and kangaroo.

“Where else can you get a bison burger in the city?” said Anthony Martinez Jr., a self-professed local burger connoisseur. “It’s a healthy burger without the healthy taste.”

What’s manlier than eating a bison? Plus, there’s a long list of add-ons, from Cheese Whiz to Fritos, so you can let your creativity run wild. Of course, if you’re not in the mood for a burger, you can always get the 100 percent beef hot dog. The menu fails to mention that it’s at least a foot long.

Before you sit down, don’t forget to pick your pickles. There are five different options, including atomic pickles for the most macho burger eaters. Just be careful not to get too many, because more than likely your friends will dare you to eat all of them.

Instead of taking a number, patrons are called by famous names, so you’ll feel like a hero when the cashier calls out, “Zorro, your order is ready!”

Once you sit down, you and your wolf pack will feel right at home, because Twisted Root’s aesthetics were obviously chosen by manly men. The floor is concrete, the ventilation system is exposed, and the condiments on the table are assorted in a cardboard six-pack beer case. The wall is decorated with truck tailgates, and the bench along the wall is really just a row of coolers.  Above the trashcan, there’s a sign that reads, “We are not responsible FOR YOUR UGLY FACE” (with “for lost or stolen items” in smaller letters). And then there’s the bar, made out of a real Winnebago.

Twisted Root is the perfect place to talk over manly subjects, watch the manliest sports highlights on ESPN on one of the multiple flat screens, or simply sit back and enjoy a delicious, manly burger while listening to Christina Aguilera’s “Genie in a Bottle.” No, wait, I mean they also play...“Say My Name” by Destiny’s Child?

Well, okay, so maybe not everything is so manly at Twisted Root. It’s a place everyone can enjoy.

“If you’re a lover of burgers, you have to try Twisted Root,” Martinez said.