What motives someone to donate generously to local causes, including but not remotely limited to student scholarships, a city park, a zoo, healthcare facilities, and a university baseball program? On a recent Tuesday night at Mavericks Sports Grill, about one hundred people gathered to find out as Dr. Allan Saxe, associate professor of political science at UT Arlington, spoke informally and in first person on "how to make yourself a locally famous philanthropist."

“I’m a paradox,” Saxe once told the Fort Worth Weekly and similarly shared with the crowd at Mavericks. “I want my name up there in lights. I love recognition.”

This kind of honesty – or in today’s vernacular, “transparency” – is one of the goals of a new series of conversations with Arlington’s movers and shakers. The idea for Arlington on Tap was hatched by long-time journalist, college lecturer and media consultant O.K. Carter, who moves and shakes in his own right, after he attended a lecture series sponsored by the Fort Worth Museum of Science and History called Public Knowledge.

After attending three Public Knowledge events, all held in Ft. Worth pubs, O.K. saw the light. “I've got some ideas for speakers and topics,” he thought, including Allan Saxe and his compelling notions about personal philanthropy. Carter rallied Mark Joeckel, founder of Arlington Proud, and the Arlington Historic Society to co-sponsor an Arlington-centric version of the series. Arlington Today signed on as media sponsor.

“We collectively agreed that people are motivated to go hear interesting speakers if the event is loosely structured,” Carter said. “Wear flip flops if you like.”

The fact that Arlington on Tap will be held exclusively in Downtown Arlington locations is not happenstance. “Downtown Arlington is beginning to rock and roll,” said Carter, “but not enough people know it. Achieving a vigorous downtown is right at the top of my priority list.”

It seems to be working. Carter estimates that half of the people in attendance at the Saxe event had never been to Mavericks. Now they know about the restaurant’s delicious brisket tacos, southwest Cajun chicken wraps, beer selection, and the friendly, smoke-free atmosphere.

Arlington on Tap keynote speakers are asked to abide by three simple but mandatory rules: keep the lecture to 30 minutes, no smoking and be civil.

The talks are free. The beer and margaritas are not. 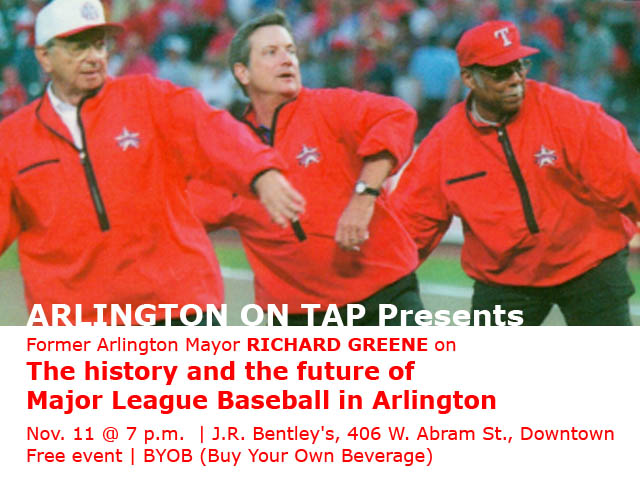 Greene will share his views on the history and the future of Major League Baseball in Arlington.

As the Fielder House Facebook page explains, no one in Arlington knows more about professional baseball than Richard Greene. As mayor, Greene led the drive to persuade voters to approve a new ballpark facility in the city, an effort that produced not only overwhelming citizen approval but remains today as the single largest voter turnout in history for a local-only election.

Now, twenty-five years later, there are rumors that Texas Rangers ownership would prefer a modern, air-conditioned facility to attract bigger crowds in the on- and off-season. With only eight years left of the Rangers’ contract with the City, Greene, no doubt, will have an informed and fascinating take.

For more information, follow the Fielder House Museum on Facebook or check out the October 5 article in Arlington Today.