The Battle of the Irish Nachos: Which Arlington bar-and-grill has the best?

What Arlington needs is a Museum of Nachos.

Besides Piedras Negras, where Ignacio “Nacho” Anaya is credited with first grating cheddar onto tostadas in 1943, no city has done more to make nachos famous than Arlington.

Making nachos one-by-one was a meticulous and time-consuming process until Arlington took over. 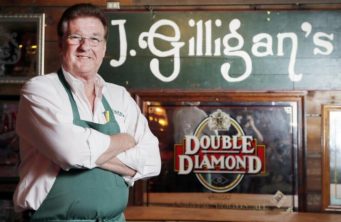 In 1976, city concessionaires in Arlington Stadium were the first to pour a dollop of queso over a fistful of tostadas, top it all with a heap of peppers and serve it as “ballpark nachos.” Then, in 1980, new Irish bar part-owner Randy Ford had an idea.

He scattered cottage fries across a plate and topped them with grated cheese and jalapenos, the way Anaya topped tostados.

The party has changed since the first bash in 1979. For example, it’s a family-friendly party with children’s activities, face painters and Irish dancers until 3 p.m.

(Once, Arlington bars would start serving green beer at 7 a.m. on St. Pat’s.)

What hasn’t changed is some of the music. The Hill City Band, once a Stockyards favorite and a regular Gilligan’s party band for decades, will play at 4 p.m. in the restaurant. The menu includes everything from burgers to chicken-fried chicken and grilled chicken salad. But this weekend, the No. 1 order will be Irish nachos.

The “nachos” start with a thin layer of cottage fries, barely thicker than a pizza crust. Then Gilligan’s loads it up with lots of cheese, chives, diced tomato and onion, crumbled bacon and jalapenos. That’s $8.79, plus a few more dollars for grilled chicken or crumbled beef. The “kids’ nachos” with cheese and bacon cost $4.99.

But Gilligan’s isn’t the only Arlington restaurant known for Irish nachos.

Bobby V’s history in Arlington goes back almost as far as Gilligan’s ...

Read the rest of the story by Bud Kennedy on DFW.com. Photo by Brandon Wade, Star-Telegram.