Superstars and Stars of Texas headline opening of winter exhibit

There’s a lot to wrap your head around when it comes to the November 20 opening reception for the upcoming winter exhibit at the Arlington Museum of Art.

The opening reception is celebrating not one, not two, but three exhibitions that aren’t just happening at the AMA but were absolutely championed by it.

“Modern Masters,” features works by twentieth century superstars; all 20 pieces of the “Star of Texas” public art project will be displayed together for the first time; and “Reflection,” a photographic art exhibit by a local artist, will debut in the Rooftop Gallery.

The main galleries at the AMA will feature works by some of the greatest artists of the mid-twentieth century. Sixty artists -- including Andy Warhol, Robert Rauschenberg, Jackson Pollock, Roy Lichtenstein, Willem de Kooning, and Robert Motherwell -- are represented in this “Modern Masters” collection from the Guild Hall Visual Arts Center in New York, the home of many of these artists’ studios. 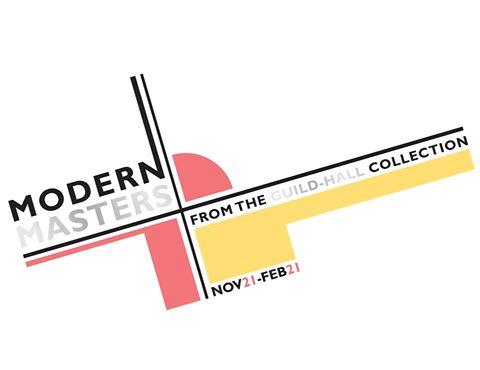 The impact that these artists had – and continue to have – on the face of fine art in America is impossible to measure. This exhibit, however, provides excellent insight into the influence of the modern art movement on the art world and popular culture.

Hats off to the leadership, board, staff and volunteers of the Arlington Museum of Art, who continue to bring exhibitions to our city which are not only of the highest caliber but are seriously cool.

The second exhibition is made up of a galaxy of twenty stars, all in thematic orbit around the City of Arlington.

In 2015, two powerful local philanthropic forces joined with the AMA to launch the Star of Texas public art project. The $150,000 project was made possible by donations, including $50,000 each by the Arlington Tomorrow Foundation and Women Inspiring Philanthropy.

“This project will open people’s eyes to art in a very tangible, accessible way,” AMA executive director Chris Hightower said in a recent interview. “By taking art to the people throughout Arlington, we will be able to raise awareness of the cultural arts in Arlington and display the creativity and talent of many local artists to a wider audience.”

The goal of the project is to install a series of public art pieces throughout the city’s cultural arts, downtown/university and entertainment districts, inspired by the City of Arlington’s brand, “Arlington: The American Dream City.”

Over the last few months, invited artists brought their concepts to life on six foot tall, fabricated star-shaped sculptures that served as blank canvases. During this time, Hightower and his team worked diligently to provide the artists the information, resources and encouragement needed to realize their vision.

All twenty completed Star of Texas sculptures will be displayed together for the first time at the opening reception. Attendees will also be the first to learn the details about a Star of Texas companion app.

Here’s why I’m still wrapping my head around it all.

Arlington has been an American Dream city for me. When my family moved to Texas in 2002, I began what would become an incredibly rewarding, 12-year tenure at UT Arlington. While I worked in various roles during those years, a common thread was – and continues to be – a genuine (and I believe mutual) tenet that I care about Arlington and Arlington cares about me.

It therefore seemed natural to me that I would apply to the Star of Texas project. And when I was invited to participate, it was my opportunity to say thank you to Arlington. Thank you for the great things we’ve done together. Thank you for the privilege to show alongside artists who are way more accomplished than me. Thank you for helping me dream big, then dream bigger.

For years, I’ve been practicing art in the edges of my life, but it wasn’t until recently that I began to show my work. Putting yourself out there is terrifying, especially at first. But thanks to Chris Hightower and the Arlington Museum of Art, emerging artists like me have an opportunity to show in gallery space that lends itself to single-subject portfolios and succinct collections.

The third exhibition opening in the AMA’s Rooftop Gallery is mine.

As I considered the works in the Modern Masters collection, I was inspired and challenged not only by their literal execution of light and dark (and everything in between) but also their figurative deployment. Upon what do they choose to shine their artistic light? How do I choose? How do you?

An artist can spend a thousand lifetimes exploring light and its counterpoints, and as an artist, I’m only at the beginning of my first lifetime. But what a thrill to be on that journey. With a great deal of guidance and encouragement from Chris, I’m presenting a collection of twenty-one of my photographic images in which lightness and darkness interplay. Giving credit where credit is due to Walt Whitman, the collection is entitled, “Reflection: Every moment of light and dark is a miracle.”

The opening reception for “Modern Masters,” the debut of the “Star of Texas” collection, and “Reflection” is Friday, November 20 from 6:30 - 8:30 p.m. Light hors d'oeuvres and beverages will be served. Visit the Facebook event for more information.

“Modern Masters” and “Reflection” will open to the public on November 21 and run through February 21, 2016. Details on the installation timeline for the “Star of Texas” are forthcoming. 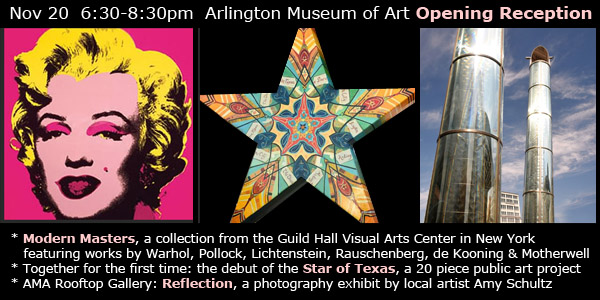