Psst: When you weren’t looking, a new Starbucks and Texadelphia opened in downtown Arlington

It’s 11:45 a.m. and your stomach is rumbling. Instead of eating a PBJ at your desk, you think about calling some friends to go out to lunch with you.

Or maybe it’s 7:00 p.m. (or a.m.), and as you’re finishing with choir rehearsal (or rushing to class), you sure could go for some hot chocolate, tea or coffee and a pastry.

May we suggest Texadelphia and Starbucks, the two newest additions to the College Park District in Downtown Arlington?

When UT Arlington first opened the College Park District in 2012, a 20 acre development along the eastern edge of campus, several restaurants set up shop in the retail space facing Spaniolo Drive (formerly Pecan Street). Like many new businesses, some didn’t stick. The good news for all of us, however, is that since 2012, Downtown Arlington has continued to build and blossom, providing more and more opportunities for business and benefits for residents and visitors.

The construction of more downtown living options for UT Arlington students and working professionals, the redevelopment of Abram Street, and sustained growth in overall student enrollment at UTA (which is currently at an all-time high of 37,008) bodes well for College Park District tenants. And let’s not forget the Tulsa Shock WNBA franchise, which is making College Park Center their new home court starting in the spring of 2016.

Now we’re seeing those retail spaces in the College Park District starting to refill as potential tenants discover that Downtown Arlington is a long term investment worth making. 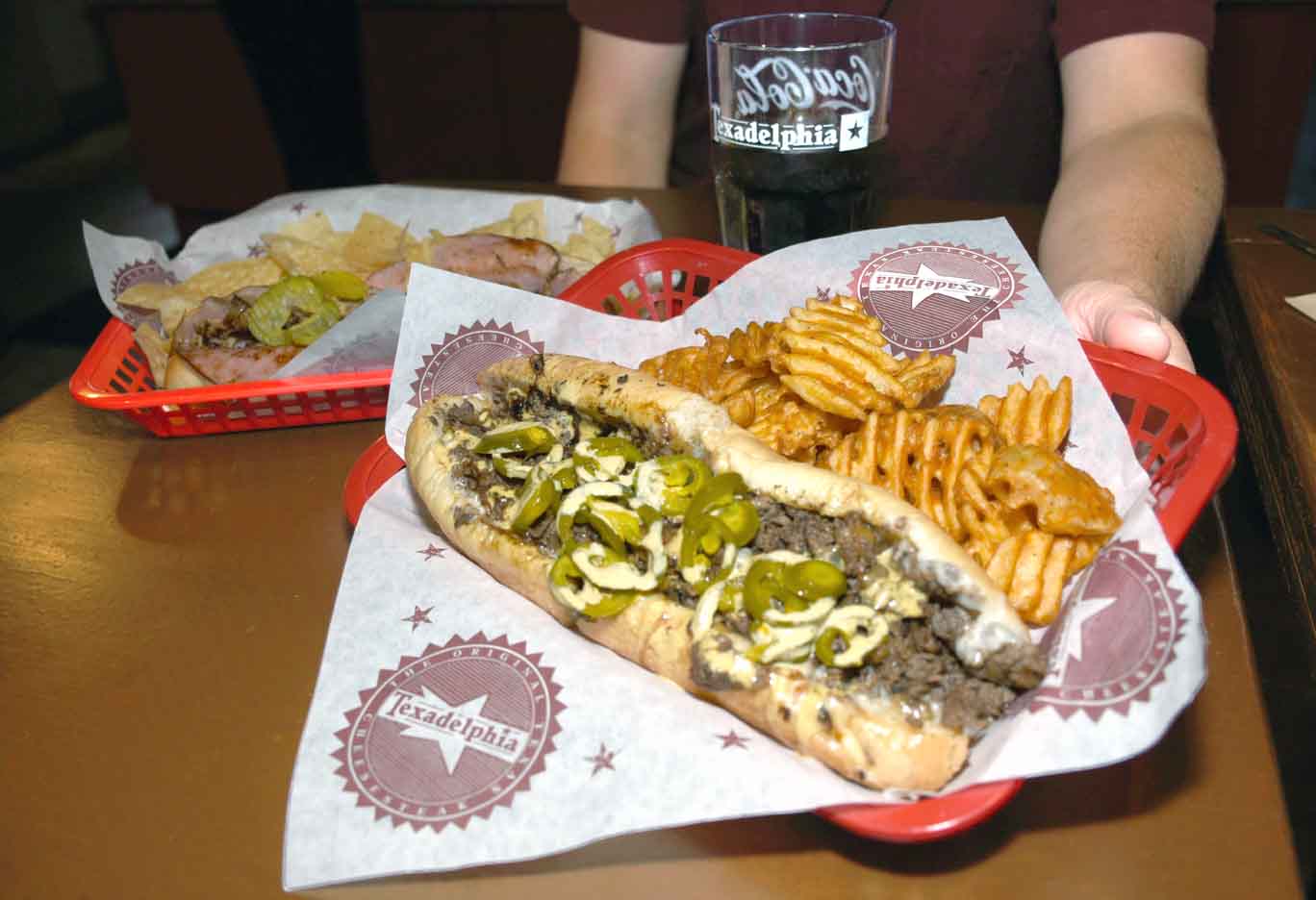 Texadelphia is home to the “Original Texas Cheesesteak,” made-from-scratch queso, guacamole and salsa, and signature sauces made in-house every day. While there are salads and other sandwiches on the menu, the cheesesteak is what you go back for. A sign on the bar in the back of the restaurant promises “coming soon,” even more reason to return on a regular basis.

The new Starbucks doesn’t just sit next to the UT Arlington Bookstore; it adjoins it. A wide and welcoming pass-through between it and the Bookstore makes it simple for shoppers to grab a coffee along with school, office and computer supplies, while the street entrance allows the franchise to remain open even after the Bookstore is closed. 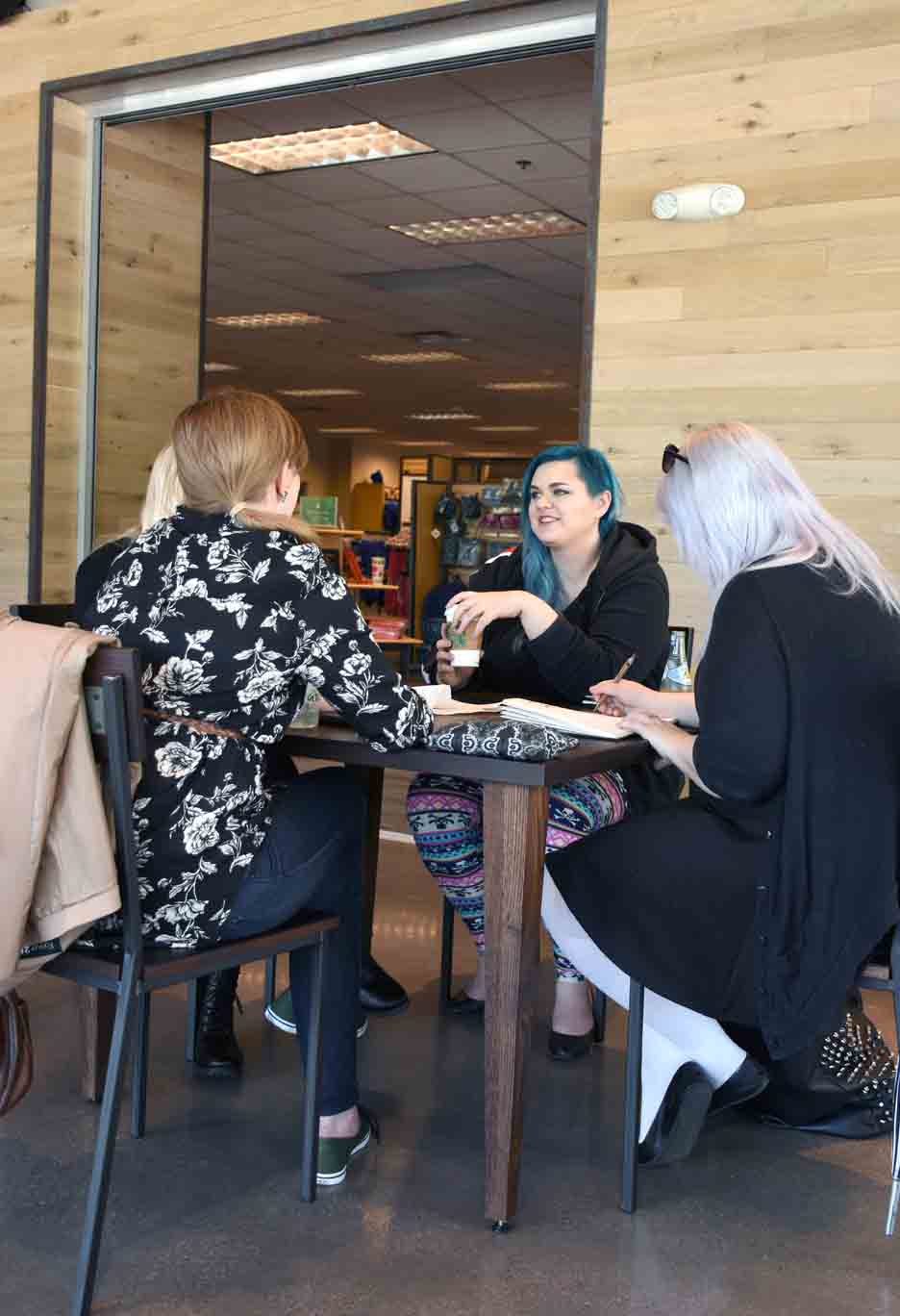 Relaxing at the new Starbucks at the UTA Bookstore[/caption]

“We’re open seven days a week,” said UTA Bookstore Starbucks manager Javan Djivo. “We serve many customers from the First Baptist Church, which is right across the street, as well as other members of the community, people who work downtown, and UTA students, faculty and staff.”

Time to hop on your bike, take a stroll, or jump in your car and head to the College Park District.

Free parking for the District is available along Spaniolo Drive, in parking lots directly east and south of the UTA Bookstore, and in the Park South garage. A Metro Arlington Xpress bus stop is conveniently located on the northeast side of the District. For more information, visit uta.edu/collegeparkdistrict