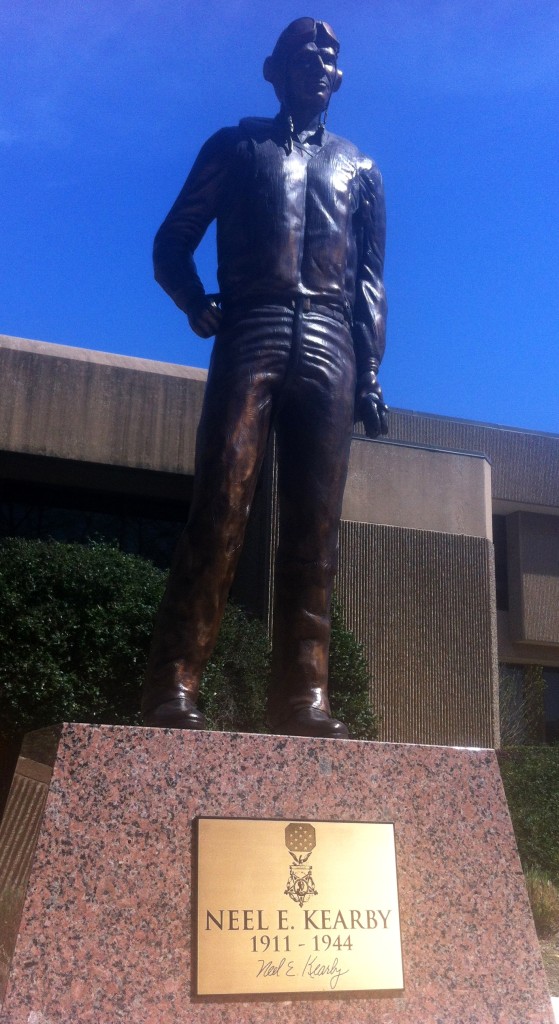 If you are driving south on Center Street in downtown Arlington, you can’t miss the tall, slim and calm statue located in between City Hall and Central Library.

The Col. Kearby Memorial, featuring a commemorative statue and Texas historical marker, is a tribute to former Arlington resident Col. Neel Earnest Kearby. Kearby received the Medal of Honor, the nation’s highest military honor, for his undaunted courage and sacrifice in WWII.

Richard Aghamalian, a former Arlington resident said, “Prominently located in the historical heart of town, the Kearby Memorial serves as an inspirational tribute and constant reminder that a young man from Arlington achieved national fame during the greatest conflict in world history.”

Aghamalian is one of the several volunteers who worked with the Arlington Historical Society to create the Kearby Memorial on Nov. 13, 2010.

Aghamalian said Kearby Memorial serves as a highly visible entrance to downtown, and the landscape and memorial should be well-maintained and attractive all times.

“Among the goals of the downtown master plan is a call for civic attractions, public art and historical preservation,” Aghamalian said. “The Kearby Memorial represents substantial fulfillment of those aims, and its artistic design has improved the streetscape and pedestrian experience in downtown Arlington.”

According to the Texas State Historical Association, Col. Kearby was born on June 5, 1911, in Wichita Falls, Texas. He graduated from Arlington High School in 1928 and attended North Texas Agricultural College (now the University of Texas at Arlington) in 1930 and 1931. He was awarded the Medal of Honor for his mission over New Guinea on Oct. 11, 1943, where he destroyed six enemy aircrafts in a single engagement. He also received two Silver Stars, four Distinguished Flying Crosses, five Air Medals and a Purple Heart. He was killed on March 5, 1944, in Wewak, New Guinea, during one of the flying combat missions.