Hey, Arlington. Did you know you can get a ride anywhere in the city for $3 to $5?

(Fort Worth Star-Telegram, March 4, 2021)  As Arlington expands its rideshare service, officials are eager to spread the word to those who may not have been previously covered.

The city’s public-private partnership with Via, a global rideshare service, has shuttled people around since 2017 — first around downtown and UT Arlington’s main campus and, last year, 41% of the city. As of Jan. 19, the service can get riders anywhere around the city for $3 to $5. 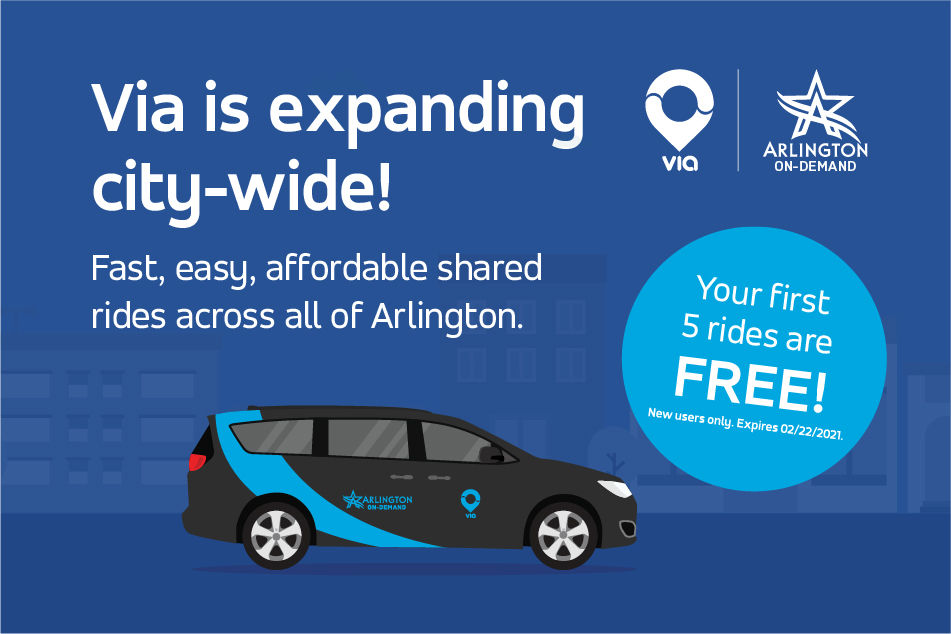 “We have a very large percentage of the city — about 60% of the city, that now has access to via that didn’t necessarily have access before,” Alicia Winkelblech, the city’s senior strategics initiative officer, told the Arlington City Council Tuesday afternoon.

Where the demand for the service has increased over the years through word of mouth, the city is paying for social media advertisements, which have accrued over 2 million views, in addition to press releases, informational videos and other marketing.

Still, council members said some of their constituents still did not know that the service existed.

“It seems that all we are doing is just not enough,” said Dr. Barbara Odom-Wesley, District 8 council member.

Ridership has steadily increased after dipping during the start of the pandemic, Winkelblech said. People took over 16,000 rides in January, the highest amount since March. As of Monday, March 1, Via drivers have conducted over half a million rides.

“I think in general ridership is starting to trend upwards again and will only grow as people start to move around more like they did pre-pandemic,” Winkelblech said.

The city will have more ridership data and more outreach as the expanded service continues, which can inform leaders whether to keep the service citywide, Winkelblech said.

Story by Kailey Broussard was originally published March 4, 2021 for the Fort Worth Star-Telegram. Photo by the City of Arlington.