Chart-topping number of graduates to become UTA alumni this weekend

Nearly 7,000 UT Arlington students plus their proud families will be painting Downtown blue (and orange) this weekend as they participate in the University’s annual Fall Commencement ceremonies.

The University of Texas at Arlington commencement ceremonies take place over the course of three days, December 15-17, and are held at the College Park Center.

Fall graduates represent more than half of the students expected to earn degrees from UTA during the full 2016-17 academic year. As they walk across the stage this weekend, each graduate will also ceremonially join the ranks of more than 210,000 UTA alumni around the globe, many working in business, healthcare, engineering, education, information technology and other high-demand fields.

“UTA graduation figures continue to astound the North Texas community,” state Rep. Matt Krause, R-Fort Worth, said. “December graduates will quickly add to a burgeoning, highly skilled workforce, not only in North Texas, but in Texas, the nation and the world. UTA is a key contributor to that talent pool.”

This is the third year in a row that UT Arlington sets a record for the total number of students graduating in an academic year. UTA also set a graduation record in the 2015-16 academic year in awarding 11,527 degrees, a nearly 9 percent increase from the 10,585 degrees awarded in the 2014-15 academic year. 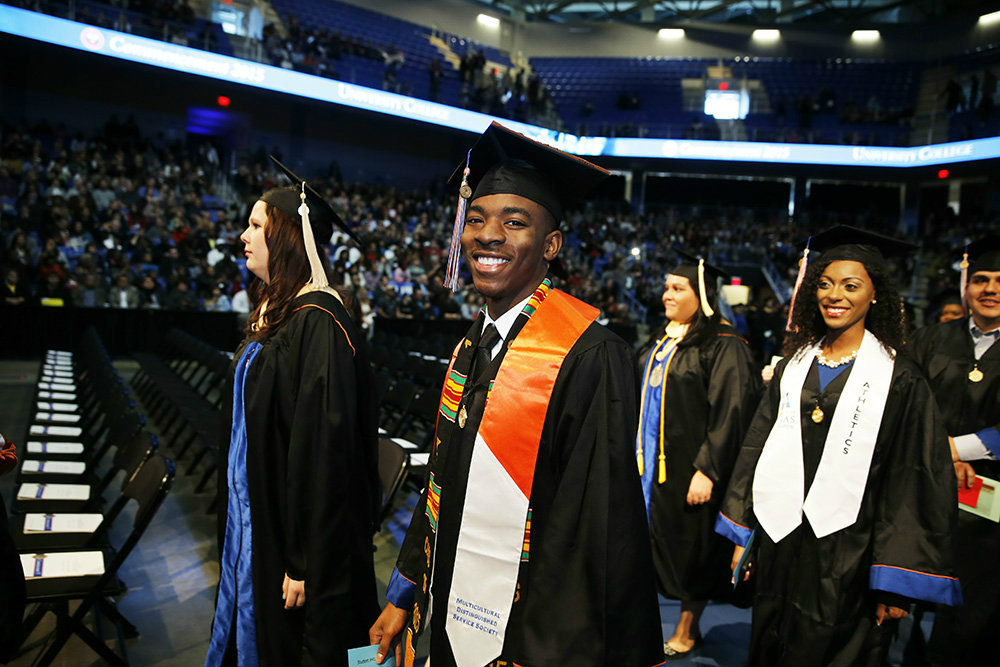 The number of summer/fall 2016 grads at UTA increased significantly over last year in the Colleges of Nursing and Health Innovation (2,557 degrees), Business (1,039 degrees) and Engineering (882 degrees). These numbers represent increases of 13.3 percent, 4.8 percent, and 16.2 percent respectively over the summer/fall 2015 figures.[/caption]

While the numbers as a whole are mind-boggling, the stories of individual graduates are most compelling.

Phyllis McGeath, who is earning a bachelor’s degree in interdisciplinary studies, is a 54-year-old mother and grandmother, was motivated to finish her college education in honor of her son Phillip, a Marine, who was killed in action. She will take one semester off before continuing with her master’s in social work at UT Arlington. Her daughter is a UTA student as well.

Justin Gathright is earning his bachelor’s degree in foreign language. Gathright has lived and traveled throughout Europe as a member of a humanitarian organization providing food, clothing and basic needs to people in villages, towns, and slums. He speaks fluent English and French, has studied Dutch, German and Spanish, and hopes to study international law. He is a volunteer for the UTA chapter of Love Your Melon, an organization that raises money for pediatric cancer research and material needs of children fighting cancer.

“UTA is a powerful engine for developing leaders, entrepreneurs, and change-makers,” said Tony Rutigliano, president and CEO of Downtown Arlington Management Corporation. “As our district grows, so will opportunities for more and more of these outstanding young alumni to stay and build careers and entrepreneurial enterprises right here in Downtown.”

As you post or tweet about your hometown University, be sure to tag us with #authenticallyArlington, @dtArlington, #MavGrad2016 and @utarlington.

About The University of Texas at Arlington

The University of Texas at Arlington is a Carnegie Research-1 “highest research activity” institution. With a projected global enrollment of close to 57,000 in AY 2016-17, UTA is the largest institution in The University of Texas System. Guided by its strategic plan, UTA fosters interdisciplinary research within four broad themes: health and the human condition, sustainable urban communities, global environmental impact, and data-driven discovery.