Puppet shows, crafts, and free books are just a few of the activities that transformed the UTA Chemistry and Physics Building into a party for families who gathered to celebrate Dr. Seuss’ Birthday on March 2.

For three hours, hundreds of families came through to participate in the festivities. They even got to celebrate with the Cat in the Hat, who made his way around to take pictures and interact with children.

This annual event was put together by the Arlington Public Library 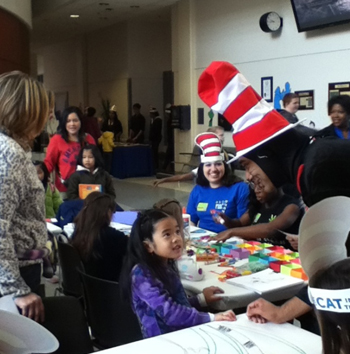 partnered with University of Texas Arlington and Blaze Through Reading.

Tables for crafts and coloring with volunteers surrounded the doorway, making it difficult for newly arriving families to get through. Children colored pictures of timeless Seuss characters and scenes as well as made Cat in the Hat faces out of art supplies.

Just beyond the table activities, families were lined up wearing silly wigs, hats, and accessories for the Dr. Seuss photo booth. Volunteers also handed out free books to children based on their reading levels as they made their way over to the story teller.

Paul Geisel, distant relative of Dr. Seuss, was one of the morning storytellers. He read “Oh the Places You’ll Go” as children inched towards him on the mat at his feet.

“The message of this story is for the older group of children, but the little ones love to listen to it,” he said.

Another great Seuss element of the party was the six showings of Dr. Seuss mini films in the planetarium. The 10:30 showing of “The Sneetches” drew sounds of oohs and ahhs from the children looking up at the screen.

At a puppet show, children sat together in the center of the room watching as parents and teenagers gathered in the chairs around them. The story was “Little Blue Riding Hood,” told by a silly puppet pig and his puppy sister.

“…and the way she met a giraffe,” said the pig.

The quick reaction from the audience indicated how intrigued the children were into the performance. They knew the pig was telling a classic tale the wrong way. A little girl in the front row jumped up and turned around to the other kids.

“A giraffe? That isn’t right. Doesn’t he know that?” she asked.

Parents laughed at her deep concern as other children told her to sit down so they could continue watching. As the story continued, so did the children’s laughter and engagement.

As many prepared to leave the party they also grabbed one last party favor. Volunteers helped children decorate a chocolate or vanilla cupcake of their choice with colorful sprinkles and icing. After all, it wouldn’t be a birthday party without cake.