On February 27, the Arlington City Council awarded a $26.1 million contract with Rebcon Inc. of Dallas to rebuild Abram Street between Cooper and Collins streets. Construction will begin this month and is anticipated to wrap up by March 2020.

Revitalizing a Major Gateway to Arlington

Downtown is the final section of the City’s Abram Street Rebuild, which started at the Grand Prairie city limits east of SH 360 in July 2014 and has progressed west to Collins Street over the past three and a half years.The Abram Street project is one of the largest street rebuilding projects in the City’s history. Abram Street is one of the major gateways into The American Dream City, providing access to the Entertainment District, Downtown, the Cultural District, The University of Texas at Arlington and other destinations. 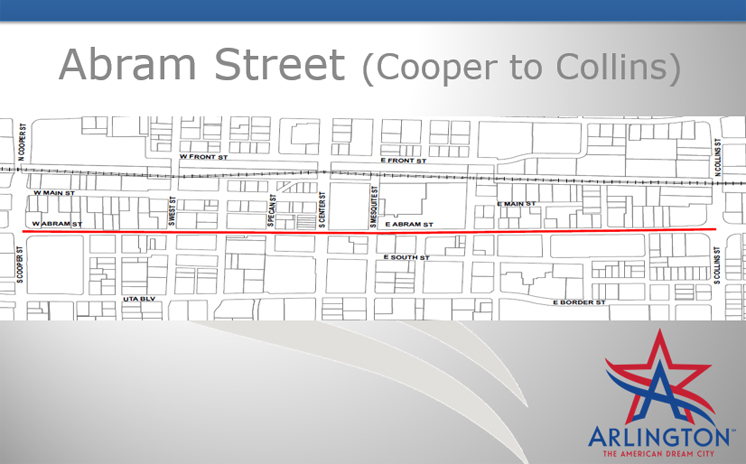 Improvements will include new water and sanitary sewer lines, paving, drainage, landscaping, streetlights, traffic signals and brick pavers that will create a plaza area in front of City Hall. The project will also include tree plantings, new benches and trash receptacles, and streetscape improvements, such as LED pedestrian lighting.

Part of the rebuild aims to create a safer, more attractive space for on-street festivals and other outdoor events that draw visitors to Downtown, which is designated by the State of Texas as the Arlington Cultural District. Retractable bollards, which are used to temporarily close a street to vehicle traffic, will be installed on Abram Street between City Hall and Founders Plaza, a public park that is also home to Levitt Pavilion Arlington. Enhanced electrical capabilities will also be added to provide support for the growing number of outdoor events held at the park.

“We realize that two years seems like a long time to put up with detours, dirt and delays. But we are confident the smoother drive, enhanced on-street parking, and pedestrian-friendly improvements will make enduring any construction-related inconveniences worth the wait,” said Keith Brooks, Public Works and Transportation assistant director.

As an incentive to complete the project ahead of schedule, the Council approved a $4,000 bonus for each day that the project is finished early, with a maximum total bonus of about $1.4 million.

The public is invited to attend a construction briefing next week about the start of this important, two-year revitalization project. This public meeting, the first of many that will be held throughout the project’s duration, is scheduled from 6 p.m. to 7 p.m. Monday, March 5 in the Council Briefing Room, 3rd Floor of City Hall, 101 W. Abram St.

Read the full story by Susan Schrock and see a slideshow of the project on MyArlingtonTX.  Click here for more about the history of the myAbram project.